Swarming and splitting season is closing, honey flow is starting.

This is a recap of Michigan State University Extension visits with commercial and hobby beekeepers over the last month, with a look to the future. The honey flow is just beginning, and a large proportion of the nectar that is brought back to the hives right now is from this one sneaky little lawn flower, the white dutch clover. Catulpas have been blooming, and it looks like Basswood is just coming on. Here are some things beekeepers should be wise to right now, going into July.

Your bees are finding everything they need right now, however, feeding a newly split colony is warranted to boost populations as their workers are busy drawing new comb out instead of foraging.

Wait for control of varroa mites

Most varroa mite control products are legally restricted from use while honey supers are on. If you still have ApiGuard or ApiVar strips or something like that in the hive, you should take them out as you add honey supers until you harvest in the fall. However, the Michigan Department of Agriculture and Rural Development has approved an emergency section 18 exemption for the use of Hopguard and Hopguard II that allows the use of those products in the brood chamber even if the honey supers are on. But, you cannot harvest wax or honey from the brood chambers. The Section 18 label needs to be printed, followed, and kept with your records if you are using it.

Tilt the top cover to allow better airflow through the colony, or add holes on the handle ends of one of your supers. Avoid putting a hole right around where you would grab!

Super with deeps or mediums

Queens are going to run out of room to lay eggs as workers fill frames with nectar and pollen. Look for lots of frames of sealed brood to indicate high hive populations. Adding supers on top will expand the area for honey storage above the brood chamber and relieve some of the pressure. Medium sized supers are a good idea if your stacks are getting high, but using deeps for honey is a good way to cycle out old full-sized brood comb. Placing an empty super above the brood boxes, but below the current honey super, is called “bottom-supering.” It’s a good way for hobbyists with more time on their hands to encourage more rapid honey storage. 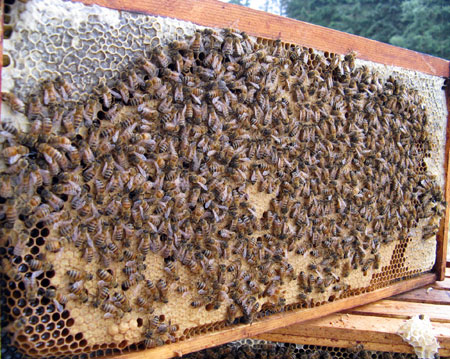 Sealed brood (center) is identified by its opaque capping and is usually tended by bees more heavily than the translucent capped honey (corners). Photo credit: greenroadfarm.com

“A swarm in May is worth a bale of hay. A swarm in June is worth a silver spoon. A swarm in July ain’t worth a fly.” Economics was a different animal when that quote was coined, but the sentiment remains the same. A July swarm isn’t worth your time or money, because it likely won’t accrue enough honey stores for itself to survive the winter. But, you still have some time to capture or trap one with a bait hive. Despite the popular view of swarms as dangerous, it is one of the most docile behaviors to observe of honey bees. They eat so much honey before they leave that they can’t sting you very easily. It’s like doing sit-ups after a Thanksgiving dinner: they just don’t even try. One exception to that rule is if it’s rainy. 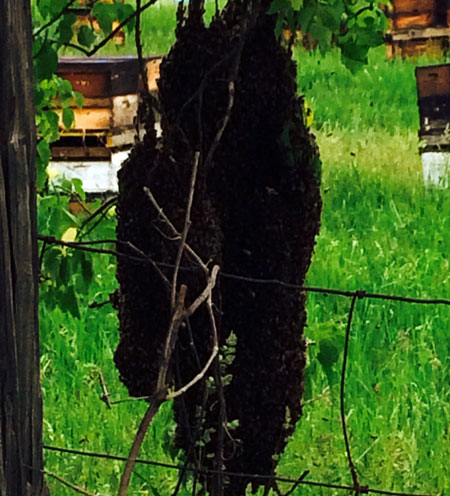 To capture a swarm, they key is to get the queen and the rest will follow. She’s usually smack-dab in the middle of the cluster, closest to where it attaches to an object. But you may not need to see her to know that you’ve been successful. A hanging swarm can be shaken into a fresh hive box with some frames removed, or snipped from its perch and leaned against the bottom board. The bee’s natural inclination will be to travel up and into the dark hive. Swarms that wrap around vertical objects, like vehicles or tree trunks, require brushing. You will need to patiently observe their behavior to determine if the queen is drawing them into your box, back to the swarm point, or someplace else.

Once you’ve captured a queen and swarm, the flyers that were searching for a new colony site will return to the swarm point and wonder where everyone went. If you watch the new hive you will observe bees wagging their abdomens and fanning their wings around the outside of the hive. They are calling those flyers to the new home, and the flyers will make ever-widening circles around the swarm point until they catch the scent and follow it. That fanning is another good sign that the queen has accepted the hive. Here’s a YouTube video of a recent capture at a Macomb County vegetable farm that shows a swarm crawling up a snipped branch to enter a hive where fanning bees are indicating successful adoption.

The Conservation Technology Information Center has a new research collaboration opportunity for farmers to document the benefits of cover crops as habitat and nutritional sources for pollinators. To become involved in or learn more about the Economic, Agronomic and Environmental Benefits of Cover Crops project, visit www.ctic.org/CoverCropMath, or contact Sara Hagmann at 765-494-9555 or hagmann@ctic.org.

The 3rd Annual Michigan Honey Festival is occurring at the Harvey Kern Pavilion in Frankenmuth, Michigan this year on July 12 from 10 a.m. to 5 p.m. The cost is five dollars for adults, and free for children. There will be lots of fun stuff going on, including a bee beard demo, mead tasting and hive decorating contest.

The Michigan Beekeepers Association summer picnic is being hosted this year by the Saginaw Valley Beekeepers Association at the Thumb Octagon Barn Agricultural Museum, located at 6948 Richie Rd, Gagetown, MI 48735, on July 26 from 12 p.m. to 4 p.m. There will be a white elephant gift exchange, 50:50 raffle and a demonstration on scouting for varroa mites. There will be some meat dishes provided, but the SVBA asks that attendees also bring a dish to pass.

The Protection Plan for Managed Pollinators in Michigan draft release