Hannah Stevens took some photographs of a Euonymus tree that was completely covered in webbing. The foliage appears nearly gone. Based on her photographs of the caterpillars doing the damage, I was able to tell her that the Euonymus caterpillar was at it again.

The Euonymus caterpillar, Yponomeuta cagnagella (Lepidoptera: Yponomeutidae) is a European species that was first reported in North America in Ontario in 1967. The larvae (caterpillars) feed in colonies that envelop the foliage in large silken webs. They are defoliators of primarily Euonymus europaea, E. kiautschovicus, and E. alatus and can kill the shrub if heavy infestations occur year after year. The female moth lays eggs in mid- to late July and covers them with a gummy secretion that hardens into a shell that protects the eggs and newly hatched larvae. The eggs hatch in mid-August and the larvae immediately prepare to overwinter under their eggshell. There is no further activity until the following year, when larvae make small webs and feed on new leaves. Cocoon formation begins in late June and adult moths appear a few weeks later. There is only one generation per year. Larvae can be controlled with a single application of insecticide spray when the small webs appear in the spring. I think it’s too late for Hannah’s tree though.

A close up of Euonymus
caterpillars. Photo J. LaForest
University of Georgia. Courtesy of
ForestryImages.org 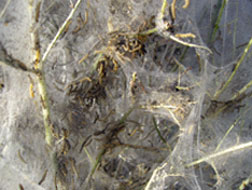 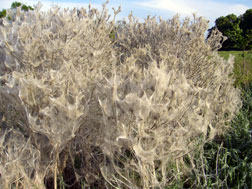