Watch for thin turf, dead patches, and skunk digging, as these could be signs that European chafer grubs are infesting your lawn.

My research technician and lab supervisor, Terrance Davis, and I finished digging samples from our turf plots at Old Channel Trail yesterday (April 12). We had made some insecticide treatments in late October for grub control. Unfortunately, nothing worked well as a late October application. However, in the same grid we also dug plots that had been treated with Merit or other nicotinoid insecticides last July, and those treatments worked extremely well (90 percent control).

We also had the opportunity to look around the golf course (located just north of Muskegon, Mich., and right on the lake shore) at the European chafer damage. We saw many large patches of extremely thin or dead turf in the roughs and along the road. The most severe damage was in areas where the turf tends to be drought-stressed during the summer. This is because European chafers like dry, sandy soils, and because stressed turf tends to have a small root mass, they are susceptible to grub injury.

If you are seeing patches of thin or dead turf now, or where skunks have been active, dig a few samples to check for grubs. If you find more than five grubs per square foot, you may want to consider treating some of these areas this summer, between June and early August, to prevent grub damage next fall and next spring (2013). The best product to use is one of the nicotinoid insecticides or acelepryn. Acelpryn should be applied in May or June for optimum results. 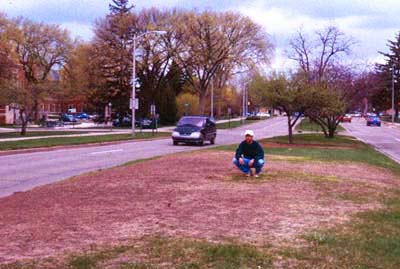 European chafer grub damage on the MSU campus in April 2002. 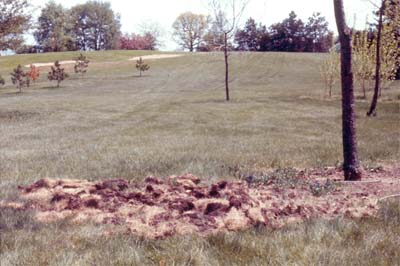 Here are the most widely used nicotinoid insecticides for grub control:

Some of the homeowner products containing a nicotinoid insecticide are:

Dr. Smitley's work is funded in part by MSU's AgBioResearch

Does a dormant lawn need to be treated for grubs?