Sweet corn growers in Michigan experienced moderate “worm” pressure this season. In many locations the first flight of European corn borer moths was high, and early-maturing varieties had to be treated at tassel emergence to prevent larvae from entering the ear (see graphs below). In most locations the second flight was lower, but by then growers were protecting their corn from corn earworm (see graphs below). The second flight of European corn borer moths was pretty much over by late August, and we did not have a warm enough summer to produce a third flight.

As usual, it was an unusual season for corn earworm. This is a migratory pest, and its appearance in the state and its abundance is dictated by weather patterns. Weather fronts brought a moderate number of corn earworms into the state much earlier than normal, in mid-June, and low numbers of corn earworms were present for most of the growing season (see PestWatch for seasonal summary: http://www.pestwatch.psu.edu/sweetcorn/tool/tool.html). Not until late August were weather conditions again favorable for corn earworm migration and the remnants of hurricanes Gustav and Ike brought more moths into the state. Pheromone trap numbers increased over the past weekend in those areas still trapping (Ingham and Oceana counties) averaging between five and eight moths per night.

I want to take the time to publicly thank all the cooperators throughout the state that set up, maintained, and collected European corn borer and corn earworm traps in 2008 and in previous years. Your efforts have helped provide essential information for Michigan vegetable growers. 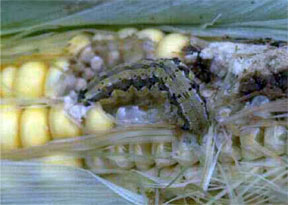 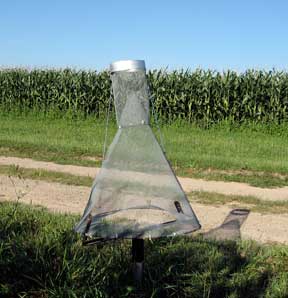 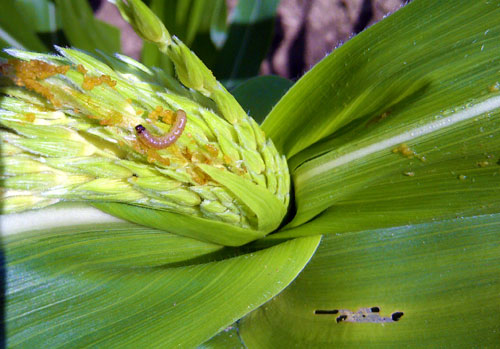 A European corn borer larva in an ear of
sweet corn.