May is the month to monitor for European pine sawflies in pines.

Many people have evergreens in their yards as part of their landscaping. For most of these people, having plenty of shiny, green needles on the trees is important. But, there is an insect that has other intentions. European pine sawfly larvae feed on the needles that were produced last year. The entire needle is often consumed, leaving just a stub. If there is a big population of immature sawflies, they eat the needles that are older than one year. They do not feed on the current year’s needles. It is possible to have nothing left on a branch except the new needles that just grew.

People often see them first when they accidentally bump a branch and all the larvae raise the front of their bodies in unison and do the wave. Because of their coordinated movements, they appear as a mass, rather than as individuals. 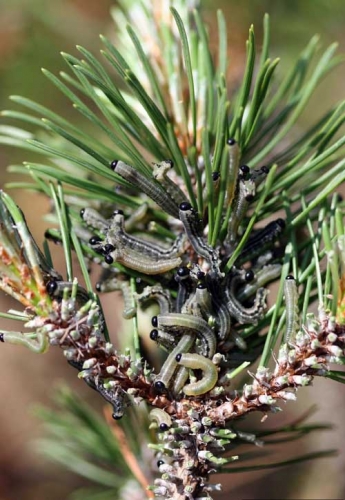 The European pine sawfly only has a short time in the spring to make a living or do damage, depending on whose perspective it is. They feed on Scotch, Austrian, red, jack and Japanese red pines. They do not bother white pines, spruces or firs. This is why it is important for owners of possibly affected trees to begin inspecting or monitoring trees in early May.

This interesting pest began its journey to your tree the year before. In late summer to early fall, the fertilized adult female sawfly flew to the tree. She landed on the tender, new needles that were produced that year. She inserted her ovipositor at the rear of her body into the edge of a needle and laid an egg. She moved and laid another egg. The needle edge healed and the eggs were protected inside the needle until they hatched the following year. Eggs appear to be yellowish or tan when inside the needle. Mommy sawfly can lay up to 100 eggs that are called a colony when they hatch.

Eggs hatch into tiny, blackish larvae in early to late May, depending on the temperatures and location in Michigan. The needles where the larvae emerged look tan, split and twisted. They appear frizzled. The larvae feed where they hatch, moving in the direction of the trunk. They live and feed in groups. These are all Mama Sawfly’s hatched eggs.

As the days pass, the larvae grow in size and change color. They are now gray- green and black-striped with a black, shiny head. The stripes run the length of their bodies. They are now up to 1 inch long. When fully grown, the larvae drop to the ground, spin cocoons and pupate.

The larvae will usually feed from four to six weeks. That seems like a long time, but not all eggs on the tree hatch on the same day. This accounts for the length of feeding. European pine sawfly larvae are big eaters: one colony of 80 to 100 larvae can eat all the old foliage off a 2-foot tree. Fifteen to 20 colonies on a 6-foot tree can consume all of the old foliage. Keep in mind that the needles that are eaten will never grow back.

To prevent damage from European pine sawflies, trees should be monitored starting in early May. Check trees every day for most of the month. Look for tan, frizzled needles right behind the new growth or tiny larvae in the same area. They can be controlled in several ways. Crush the larvae on the needles with a gloved hand. Shake the larvae off the tree and step on them, which is known as the shake-and-stomp method. They can also be killed by spraying them with insecticidal soap, carbaryl or cyfluthrin. But most importantly, catch them before they do much damage.

Who drooled all over my plants?