Managing the crawler stage of magnolia scale is complicated by the 2012 heat wave. Using Enviro-weather helps remove the guesswork about timing pesticides.

How hot has it been? Extended periods of hot weather led to an early hatch of a serious pest of magnolias. Some places in Southern Michigan experienced 15 to 25 days of temperatures above 90 degrees F this year, according to data from MSU’s Enviro-weather website. Very warm temperatures left many areas across Michigan ahead in growing degree days compared to the average over the last five years. Magnolia scale crawler hatch began in the last days of July nearly a month ahead of the norm in the southern tier of Michigan counties.

Magnolia scale is one of the largest scales to feed on plants in Michigan. The small crawler stage of this pest spreads over the branches of the magnolia tree searching for a suitable site to insert its syringelike feeding tube that it uses to pull fluid from the tree. Branches become blackened as mold grows on excretion from the scale insects; this is called sooty mold. Branches may die as scale populations escalate. The first indication for most people that their magnolia is having a problem is the presence of bees. Bees, wasps and hornets love to feed on the sugary sap excreted by the scale insects. 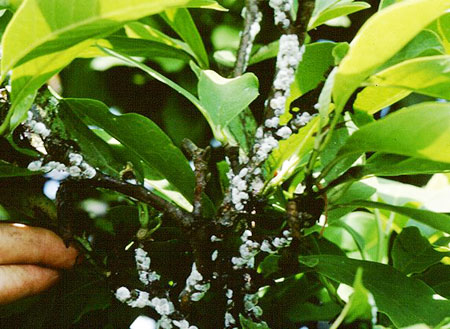 Managing magnolia scale is best accomplished by targeting the crawler stage right after hatch in late summer.  There is a small window of opportunity for managing the young scale insects with pesticides and correct timing can mean the difference between protecting the tree from damage and watching a population grow to the point that sections of the plant begin to die due to insect feeding.

Using hatch dates in Mid-Michigan from previous years to target control of magnolia scale in 2012 could lead you astray as the start of crawler hatch has occurred as late as September 9th and as early as August 3rd. How do you know when to treat for this pest? Is it appropriate to begin spraying early August and continue to treat into September? This year crawlers began hatching in the Saginaw area in late July. Why guess? Correct timing of pesticides can increase its effectiveness and reduce the amount of pesticides used. For assistance, bookmark the Enviro-weather page and utilize local weather data to determine the actual growing degree days for your area. This will help you to select the best treatment timing based on the most vulnerable life stage of insects like the crawler hatch of magnolia scale.