Fall is a great time to control adelgids on spruce

Cooley and Eastern spruce gall adelgids are the sap-feeding insects that cause pinecone-shaped galls to form on the shoots of Colorado blue spruce (Cooley) and pineapple-shaped galls (Photos 1 and 2) at the base of new growth on white and Norway spruce (Eastern). These galls turn brown in August through September and the mature nymphs emerge. 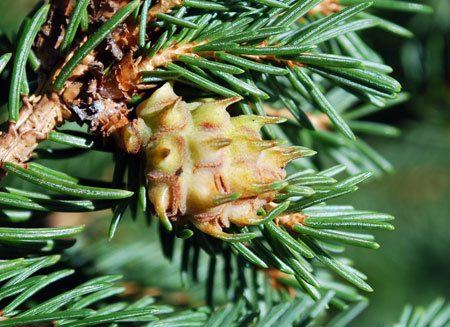 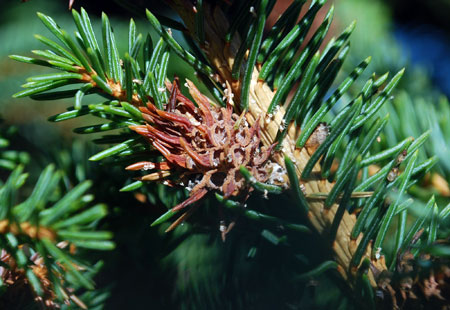 With Cooley spruce gall adelgid, they molt into winged adults that will either remain on spruce or fly to Douglas-fir trees. The fall generation includes both male and female adelgids that produce the overwintering immature female. Even though Cooley has two different hosts, it doesn’t require both to complete its lifecycle.

Eastern spruce gall adelgid nymphs move to the tips of the needles where they will molt into winged, egg-laying females (Photo 3). She lays eggs that will hatch and result in the immature females. 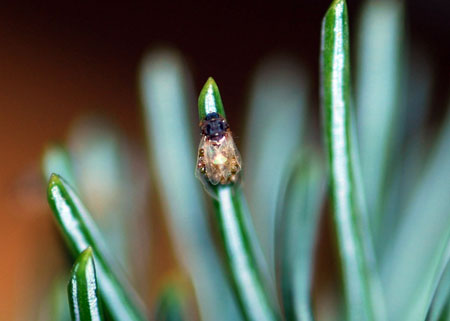 You will find the overwintering female in bark crevices of twigs and around the base of the buds. In the spring, these immature females, often called stem mothers, mature and then lay eggs. These eggs will hatch and the nymphs begin feeding, causing abnormal growth that develops into the gall.

If you have a problem with either of these two insects, fall is a great time to control the overwintering immature females. Time your application at 2,800 to 3,000 growing degree days base 50 (typically mid-September through October).