Fallen oak shoots may be work of the twig pruner

If you find oak shoots with green leaves on your lawn this time of year, don’t worry; it is probably caused by a beetle, and it won’t hurt your tree.

Sometimes a member of our MSU Extension team is plagued by an insect or disease problem at home and comes forward with a few pictures. This week, Bert Cregg of MSU’s Departments of Horticulture and Forestry brought in some photos taken June 2-4 in East Lansing, Mich., of his lawn littered with shoots from his oak tree (Photos 1 and 2). A close look at the severed end of the twig reveals a smooth cut with an oval-shaped chamber in the center of the twig, packed with sawdust-like frass (Photo 3). This is diagnostic for the twig pruner,Elaphidionoides villosus, (Coleoptera: Cerambycidae). 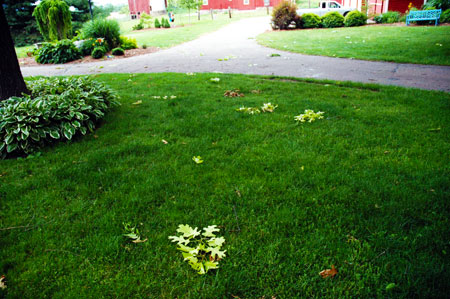 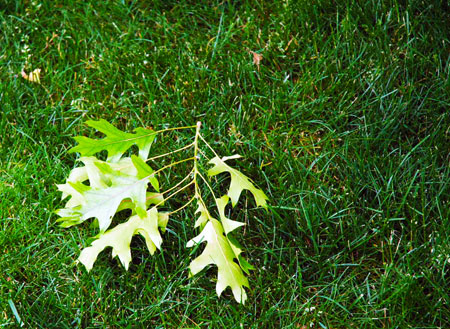 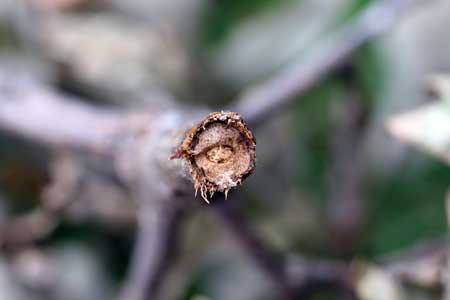 Photo 3. The presence of a small, oval-shaped plug in the cut end
of the branch is a dead giveaway the culprit is the oak twig pruner.
Photo credit: S. Gower, MSU Diagnostic Services.

The twig pruner cuts through the twig from the inside, but leaves the bark intact. For a short time, the injured branch remains on the tree, but eventually succumbs to the wind, breaks off and falls from the tree. A small, oval-shaped hole in the end of the branch is a tell-tale sign of the twig pruner. Look closely for this hole because the larva usually packs the opening with a frass plug to keep out predators and other unwanted guests. Twig diameters at the point of the cut usually range from about 3/8 to 3/4 of an inch. Common host trees are reported to include oak, hickory, pecan, walnut, basswood, redbud and hackberry.

Reports of the lifecycle of the twig pruner vary somewhat. As we understand it, the females lay eggs in small twigs near the ends of live branches in late spring. The larva eats the inside of the twig then bores into the center of the branch and tunnels downward (Photo 4). When nearly fully grown, the larva severs the twig or branch by tunneling in circles from the center outward to the bark. Pruned twigs or branches soon break and fall. The larva continues to feed in the severed twig until it pupates. Winter is passed in the severed branch and the adult emerges early the next spring (Photo 5). 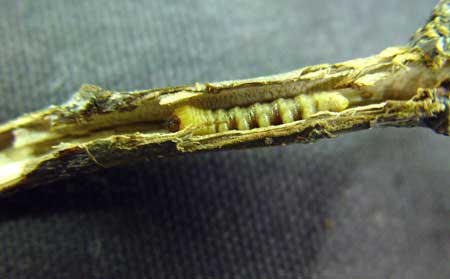 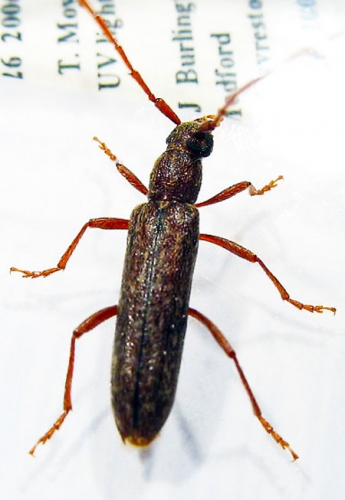 Although the sight of many severed branches on one’s lawn can be alarming, it does not harm your tree and the twig pruner is kept under control by natural parasites and predators. You can also help by collecting and destroying the severed shoots. An insecticide spray is not necessary and may cause more harm to natural enemies than to the twig girdler.