Fire blight is not just a disease for commercial apple orchards. Landscape crabapple trees are also susceptible to Erwinia amylovora.

Fire blight is traditionally thought of as a disease that infects trees in commercial apple orchards. However, the ornamental crabapple is also in the susceptible genus, Malus. In the last few weeks, numerous cases of fire blight on crabapples in landscape plantings have been confirmed by Michigan State University Diagnostic Services. Growers of the popular ornamental tree should be familiar with the host range, environmental conditions conducive for disease spread, and management strategies.

Fire blight is caused by the bacteria, Erwinia amylovora (Photo 1). It not only affects those in the genus Malus, but also other members in the family Roseaceae such as pears (Pyrus spp.), firethorns (Pyracantha spp.) and less commonly hawthorns (Crataegus spp.), juneberry (Amelanchier), mountain ash (Sorbus spp.) and Spiraea. The prime conditions for inoculation are when temperatures are between 75 and 85 degrees Fahrenheit and it is rainy and humid.

Bacterial organisms enter plant tissue through natural openings or wounds. Two opportunities when fire blight can enter are during bloom and after a thunderstorm where hail or high winds injure leaves and branches. This summer in Michigan, there have been numerous reports of hail in a number of recent severe storms during late June and throughout July.

When the bacteria infect the branches, the cankers ooze a watery, tan, bacterial substance. The infected shoots or flowers die within 1 to 2 weeks of infection and provide inoculum for new shoots to become infected. Infected new shoots turn brown and bend into a distinctive shepherds hook. As the disease progresses, it can infect the older growth forming cankers where the bacteria can overwinter.

Also, as shown in the fire blight lifecycle, fire blight bacteria can be spread by pollinators. Therefore timely identification and management of the disease can prevent spread to older growth and to other nearby susceptible plants.

In order to manage fire blight, trees or shrubs should be carefully pruned during a period of dry weather. If the infection is rapidly spreading and the tree is actively growing, sterilize the pruners in a ten percent bleach solution between each cut. If pruning is done in the dormant season, there is no need to sterilize the pruners. To prune an infected limb during the growing season, cut 6 to 12 inches below the infected shoot on the parent branch (Photo 2). If the tree is dormant, the cut only needs to be 4 inches below the joint of the infected shoot on the parent limb. If the infection is on the trunk of a main limb, remove the infected bark and do not cover the area with any other material. A pruning management strategy is essential in order to prevent further infection as the bacteria can overwinter in the cankers and provide inoculum for the next growing season. 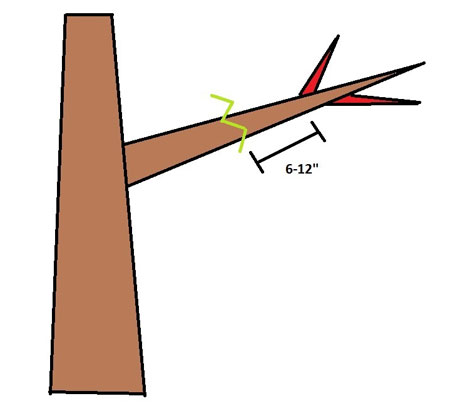 Photo 2. Cut the parent limb 6 to 12 inches below the closest fire blight-infected shoot (shown in red) during the growing season.