Firewood: You may be bringing in more than just wood

Insects can be accidental travelers, especially when bringing firewood into your home. 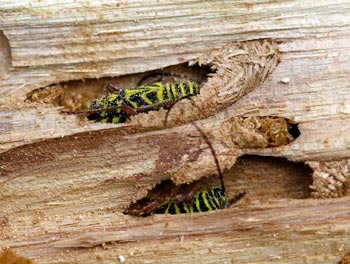 Many people are burning firewood to help control heating costs. Firewood can be less expensive, but there is also more work involved than with other types of heat. Because wood is a natural product, it attracts insects, either before it died or after it was cut. Some of these insects could be transferred to the house when wood is brought in. A few insects have the ability to create damage, but having wandering, six-legged critters that do nothing can still be annoying for many people. Using pesticides on wood is not an option as some of these could cause chimney fires and the fumes can be harmful when burning wood.

To avoid those accidental insect problems, Michigan State University Extension recommends storing firewood indoors for as short of a period as possible before burning. If the wood is indoors for several days, the wood, plus the insects, warm up. The insects will leave the wood to become unwelcome houseguests. Wood that is stored in the garage or against an outside wall of the house could put wood damaging insects next to your house. Critters like chipmunks or snakes have also been known to move into stacked wood during warmer months.

Newly cut wood usually takes six months to season, or age, to dry out enough for burning. How quickly it dries out depends on the density of the wood and whether it has been split so it dries out more rapidly. As wood is drying, it is best to not pack it tightly so air can circulate. It is also an advantage to have the wood stacked where the heat of the sun can contribute to moisture loss. Do not let the wood touch the ground. It slows drying for the bottom layer and makes it easier for insects to move in. 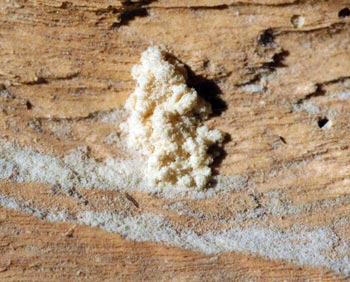 One of the most common insects to be found in firewood is the powder post beetle. Their damage is seen long before any beetle is discovered: small, pencil lead-sized holes in the wood and sawdust so fine it feels like flour or talcum powder.

Locust borers can be found if the firewood is black locust. These insects often inhabit dead and dying locust trees. This is a beetle that is classified as a longhorned beetle because of its extremely long antennae. The adults are very colorful with their black and yellow striped pattern.

There are a number of bark beetles that live and feed between the bark and the wood. Dead elm trees are often home to elm bark beetles. A variety of other insects may move into this part of the wood because it is a protected area.

Carpenter ants can be found in the heartwood of damaged trees. They would also be happy to look for damp, water-damaged wood in your house and just vacate the firewood and move into nicer housing.

There are others insects like metallic wood borers and old house borers that are not as common, but the final word is that you do not have to meet any of these, as long as firewood is handled correctly.