We had a run on fishing spiders brought into the lab over the past two weeks or so. The one we see most often is the dark fishing spider, Dolomedes tenebrosus, (Araneae: Pisauridae), which is one of our largest spiders. Females, which are quite a bit bigger than males, may measure over an inch, not including the legs, and over three inches when the legs are included. And, they’re hairy and most people tend to think that big and hairy spiders are the most dangerous spiders, which is not true. Fishing spiders do not spin webs to capture their prey. They overwhelm their prey with speed and cunning. They typically live near water where they lie in ambush at the edge of a pond or stream; waiting for prey to come within striking distance. They are capable of running over the surface of the water in pursuit of aquatic insects, tadpoles and even small fish. When threatened, they may dive underwater and wait for the danger to pass.

Unlike other members of the genus Dolomedes, dark fishing spiders seem willing to travel quite far from water in search of prey. Some find their way into homes where they have been found in basements, kitchens and even bedrooms, much to the dismay of the human occupants. The people who brought them to the lab over the past few days were quite excited and shocked to find such a big, hairy spider in their homes. Despite their size (and hairiness), fishing spiders are not particularly dangerous to people or pets.

Female fishing spiders routinely attack and kill males before, during and after mating. This behavior is sometimes referred to as sexual cannibalism and is relatively widespread among invertebrates, and is particularly prevalent amongst arachnids. It is pretty easy to understand the benefits to the female of eating her partner after mating, i.e., a tasty meal that will nourish and enhance the survival of her developing eggs. But why would a female fishing spider attack and eat a potential partner before mating? Mating systems ecologists (yes, there are such people out there) offer three possible explanations.

First is the suggestion that sexual cannibalism may simply be the byproduct of mistaken identity, and generally, aggressive females attack males as prey items before realizing their value as mates. Sort of like, “Oops, sorry, Honey, I didn’t recognize who you were before I killed and ate you.” Second, females may use their aggression towards potential mates as an extreme mechanism of mate refusal and selection. In this case, males are quickly sized-up, and those who don’t make the grade make for a good snack. No, most emphatically, means no. The last theory as to why a female might eat a potential mate before mating is that females make a choice about what they need more, a mate or a meal. This is essentially an economic model suggesting that females adaptively weigh a courting male’s value as a mate versus his value as a food item.

Whatever the reason, just be grateful you’re not a male fishing spider. 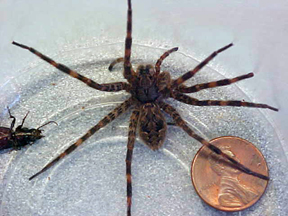