Floating classroom provides an up close look at local waters

Harbor Island is a popular spot in Grand Haven. Soccer fields, bank fishing spots, and the popular boat launch on Coho Drive bring a steady stream of people past the dock where the D. J. Angus is moored for much of the year. Thousands of people have been on board the D. J. Angus since it began operating in 1986, but many more who pass by each day do not realize that this fantastic resource is available so close to downtown Grand Haven.

This 45-foot research vessel is owned and operated by Grand Valley State University and serves as a “floating classroom” that offers educational programs on the Grand River, Spring Lake, and Lake Michigan. The dock at Harbor Island provides easy access to all three water bodies, and a typical 2 ½ hour excursion offers participants a chance to compare water quality at different sites.

The D. J. Angus often hosts school groups of fourth grade and above, accommodating up to 26 passengers in addition to the crew. Adult programs are also offered, and even people who have lived on local waters for years will almost certainly come away with a greater understanding of what lies beneath the waves.

On Sept. 16, 2015, Michigan State University Extension’s District 7 Council took a trip on board the Angus. High waves prevented sampling in Lake Michigan, but comparisons between the Grand River and Spring Lake were made and a variety of topics were covered by educators with GVSU and Michigan Sea Grant.

Council members learned about invasive species, even finding some quagga mussel shells in the Grand River. Although Michigan has taken steps to prevent the spread of invasives by requiring that boaters remove plants and drain water from boats, a recent study found that boaters are not always clear on what the laws require. Participants also heard about two emerging invaders, New Zealand mudsnail and Didymo, that can even hitchhike on the soles of boots or waders.

Watershed connections were another theme of the trip. What happens on the land invariably affects the quality of water in rivers and lakes. One example was provided by a Shoreline Assessment of Spring Lake, which found that 62.2 percent of the shoreline has been artificially hardened. “Rein in the Runoff,” a project undertaken by collaborators with GVSU and Sea Grant, found that re-vegetating buffer strips would be one of the most cost effective ways to improve water quality in Spring Lake.

Hands-on sampling was the highlight of the trip, though. Participants assessed water clarity, sediments, bottom-dwelling invertebrates, plankton, temperature, oxygen, and other water quality parameters. One of the key points was that high nutrient loads from runoff result in low oxygen levels, particularly in deep areas of Spring Lake. Sensitive species cannot tolerate low oxygen levels, so only a few types of invertebrates are found here. 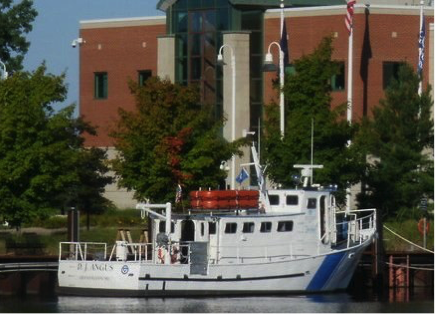 All in all it was an enjoyable and enlightening day on the water. In summing things up, presenters noted that environmental quality in the Grand River and other local waters have improved in many respects over the past several decades. However, several challenges remain and new threats (including Asian carp) may be looming on the horizon.

To book your own group trip on the D. J. Angus or its sister ship in Muskegon, the W.G. Jackson, follow instructions given on the Annis Water Resources Institute website. Graduates of the Master Naturalist program in Ottawa and Kent counties will also have the opportunity to attend a supplemental class onboard the D.J. Angus on Aug. 20, 2016 from 8:00 a.m. to noon. The class, entitled “Great Lakes Issues and Ecology,” is also open to the public. Online registration will open in January 2016; registration cost is $40.00. Contact Ginny Wanty (wanty@msu.edu; 616-632-7873) for early registration.