Over the past few weeks, the diagnostic lab has received quite a few greenhouse ornamental samples. Below is a review of some of the diseases we have seen.

Impatiens necrotic spot virus has been detected on various hosts from multiple locations. The range of symptoms caused by this virus continues to impress me. Typical ringspot symptoms were present on New Guinea impatiens, coupled with misshapen leaves and poor flowering. Symptoms on nemesia resembled those more typically caused by a fungal pathogen with brown lesions on the stems and collapse of the leaf tissue surrounding the petiole. Other plants testing positive recently included petunia and double impatiens.

Calibrachoa samples are frequently submitted to the lab. Several samples in the last week were submitted with phytophthora stem or root rot. Infected plants wilt and quickly collapse, the stem tissue is often discolored. Other common diagnoses for these plants include iron deficiency (caused by high pH), tobacco mosaic virus and phytophthora root rot.

Downy mildew has been a problem for at least one grower of strawflowers (Bracteantha bracteata). The pathogen was sporulating heavily creating a thick white fuzzy layer on the underside of the foliage. They symptoms can easily be confused with powdery mildew. Downy mildew problems have also recently been seen or reported on Jamesbrittenia and coleus.

Bacterial leaf spot of zinnia (Xanthomonas campestris pv. zinniae) has been confirmed on two different zinnia samples. Symptoms include small water soaked lesions that may be fairly evenly distributed across the foliage. Plants of varying ages are affected. 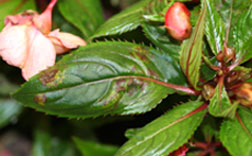 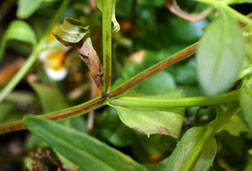 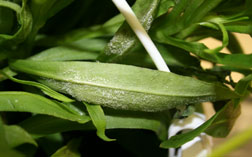 Photo 4. White fluffy sporulation on the underside
of strawflower foliage infected with downy mildew.
These symptoms could be confused with powdery
mildew, a very different disease. Photo credits:
C. McFarlin

Pruning for disease management and yield benefits in hops