Greenhouse growers who raise Boston fern and other fern species need to familiarize themselves with this leaf-feeding caterpillar. Information on its life cycle and management strategies will help you avoid damage.

In the last few weeks, Michigan State University Extension has received reports across Michigan that growers have found Florida fern caterpillar, Callopistria floridensis (Guen’ee), larvae on Boston ferns growing in their greenhouses. This insect is not known to overwinter in Michigan and probably was attached to plants brought in from the southern region of the United States. Scouting plants that arrive in your greenhouse is critical to finding it before it causes damage to the foliage of fern plants.

In Florida, the caterpillar goes through the four life stages of a typical moth: egg, larva, pupa and adult moth. The stage we found was the larva that is shown in Photo 1.

This insect develops more rapidly at temperatures above 50 degrees Fahrenheit, completing a full lifecycle in 30 to 60 days at 70 to 85 F, respectively. Eggs are laid singly by the female at the rate of 200 to 600 per female and are found on the underside of young leaves and on the fiddleheads of the plant. After hatching, the caterpillar stage has five to six instars and they consume more foliage as they get larger (Photo 2). 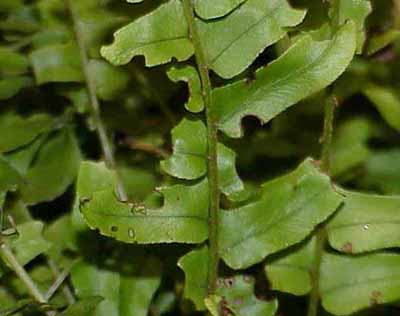 When fully grown, the caterpillars are approximately 1.5 inches in length. Larval color starts out glassy-green then turns to darker brown, velvet-black or may stay green. They have some colored bands running down the sides of their bodies.

Caterpillars are typically night feeders and are found in the upper portion of the foliage during low light times of the day. This insect pupates on the ground, covering itself with debris, and is hard to find. Adults emerge and have very distinctive color patterns on their forewings (Photo 3). 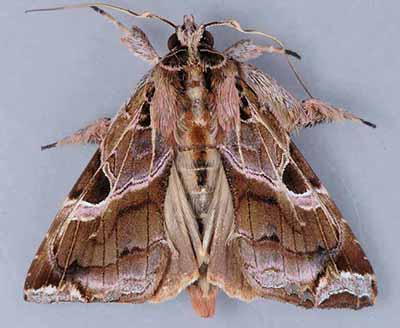 The Florida fern caterpillar has been found to be resistant to a number of insecticides including the pyrethroid group. If you note the insect and have leaf feeding, consider rotating insecticide groups to avoid resistance developing. Materials that are known to be effective include Bacillus thuringiensis products like DiPel 2X or Javelin, Adept, and Pedestal. You may need to make multiple applications to achieve good control. Be sure to get thorough spray coverage.

For more information, see “Biology and Management of the Florida Fern Caterpillar” from the University of Florida Extension.

Be on the lookout for a new pigweed species, purple amaranth