A tree care company near Dearborn, Michigan sent the Landscape Alert team the following question: “We have three magnolias on our property that do not look like they will flower. Following the icy cold, snow change in weather we had the week of April 9, the flower buds seem to have dried up and leaves are sprouting instead. We have six maples that seed and they, too, are sprouting leaves and not seeds. We walked the neighborhood observing other trees and couldn’t find any magnolias that looked like they would flower. We would appreciate any insight you might have.

Dean Krauskopf responds: “Flower buds are susceptible to damage at higher temperatures than are vegetative (leave and stem) buds. I think the sudden cold temperatures killed the flower buds and didn’t damage the vegetative buds. This doesn’t really harm the tree in the long run; actually many times we see increased vegetative growth after an episode like this because all the photosynthates go to the vegetative parts of the tree not the seeds. This type of damage is localized since many other areas in Metro Detroit are not seeing any damage.”

Bob Schutzki also notes: “This will be a questionable Magnolia season. There were several trees that began to open before the return of the snow. These flower buds were damaged. The extent varies with the species and cultivar. On some, the outer flower petals were damaged however they still opened with some color, distorted but some color. We have a few M. stellata cultivars on campus that are flowering now. There was a little damage, but not severe. Then again there are others where the buds are gone. Unfortunately it is not black and white. If vegetative growth is pushing out behind the flower buds you can assume they will not flower.

The same is true for red maple. Flowers were in full bloom when the snow came. Some of the tiny developing samaras were visibly blackened by the cold temperature. The conditions will minimize seed production this year.”

Bert Cregg photographed some of the affected trees on the MSU campus and comments: “For many magnolias around the MSU campus, the flower loss was complete. Some trees in protected areas still lost a major portion of their flowers. In most cases, there will not be any long-term damage to the trees, but this year’s show is over before it got started. Some other spring early flowing species such as forsythia also suffered some flower loss.” 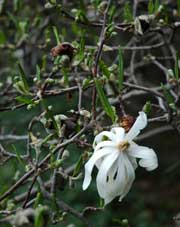 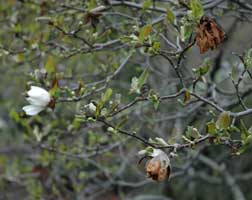 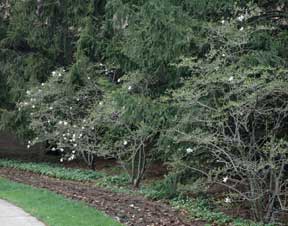 Left: These magnolias have resumed shoot growth but the flower show is
over for this year. Right: About three-fourths of the flowers on these star
magnolias on the MSU campus were killed by the April 2007 Winter Blast.
Photo credits: Bert Cregg