Freeze injury to wheat is being reported throughout much of the state. While the injury is not extensive overall, the damage is a reminder of how precarious premature springtime growth can be for the crop.

Wheat tissue has clearly been frozen in a number of fields this spring. For the most part, the injury is only temporary, but there are occasional exceptions in particular fields.

It could be argued that the culprit this spring was not so much the frigid temperatures as the fact that the crop was forced to leave its protective dormant state prematurely. Of course, this was prompted by unprecedented warm temperatures particularly between March 15 and 23. According to Enviro-weather, many stations in central and southern Michigan recorded daily high temperatures hovering within the 60 to 85 degree range and daily lows largely exceeding 45 degrees for the eight-day period. While wheat was partially awakened from dormancy prior to this and dormancy is a gradual process, it appeared that the warm conditions in mid-March fully launched wheat into the new growing season, ready or not.

The first dangerously cold temperatures to wheat came, for example, in the Thumb region on March 23 where some growers reported temperatures falling to nearly 20 degrees. This caused moderate leaf burn in many fields with isolated cases of more severe injury. The greatest injury seemed to occur where some coarse soils or muck soils did not have an adequate moisture content to serve as a source of retained heat. Here, the leaves were nearly burned to the ground, while the growing points remained alive. Interestingly, wheat growing through a layer of chaff from the previous crop also tended to be more vulnerable (see pictures below). If the growing points of these injured plants remain alive, growers can expect the affected plants to have delayed development and a reduced number of tillers. 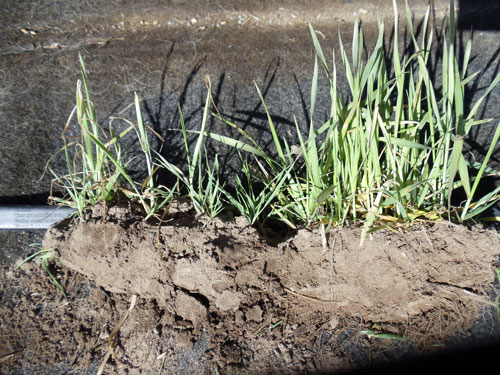 The effect of freeze injury to the appearance of wheat one week following events (plants
on the right received little damage in contrast to those on the left). 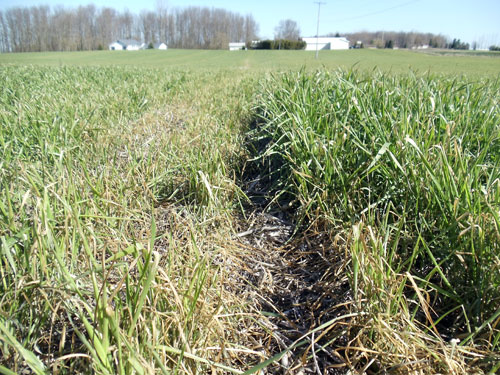 The freeze-injured plants were growing through a layer of chaff from the previous year’s
soybean crop.

The frigid temperatures returned this past weekend with much of the state experiencing temperatures in the mid-20s during the early morning hours of Saturday, April 7. In parts of the northern reaches of the state’s wheat growing area, however, temperatures dipped closer to the 20 degree mark. More growers are expected to see the effects of this latest bout of cold temperatures this week.

A second result of the cold temperatures is that many wheat fields are showing injury from nitrogen and herbicide applications. Here, too, despite wheat having an unhealthy appearance, the crop is expected to fully recover in almost all cases.

Despite all, there is cause for optimism over the prospects of the 2012 crop. With some moderate amounts of rainfall and the return of warm temperatures, wheat is likely to quickly recover and regain its healthy coloration.