Temperature changes and availability of moisture can damage landscape plants during the winter.

I recently traveled up to Cheboygan to see if winter had come to northern Michigan. I brought my cross country skis along, optimistically hoping to find snow. To my amazement, winter found me between Saginaw and Bay City, Mich., with temperatures dropping 11 degrees in less than 30 minutes. I found winter! Wet pavement quickly turned into a glaze of ice on the highway making a mess of my travel plans. Sudden changes from a warm winter’s day to below freezing temperatures can also cause problems for plants in our landscapes.

Winter damage can occur on evergreens during sunny and windy winter days. Plants like rhododendrons and Alberta spruce are susceptible to loss of moisture through their leaves that cannot be replenished once the ground freezes. Damage from desiccated leaves may not show up until early spring, causing dead leaves or leaves with brown margins and tips. This is especially true if soils were dry prior to the ground freezing. We should see less damage from drying out of leaves this year since most areas of the state went into winter with moist soils and have experienced above normal temperatures, keeping soils in many areas from freezing. A check of the East Lansing, Mich. weather station through MSU’s Enviro-weather website shows soil temperatures, at a 2-inch depth, never falling below 32 degrees in the first two weeks of February.

Other types of damage to plants due to quick changes in winter temperatures are frost cracks and sunscald. Frost cracks are vertical cracks in the stems of trees. On sunny days in the winter, bark will warm up, causing cells to expand in the bark and wood directly below the bark. As the sun sets, temperatures drop quickly, causing the bark to cool and contract. The wood under the bark does not cool as quickly, causing the bark to split. Frost cracks may first appear on very young trees that have not developed a thick layer of bark. The south and southwestern side of trees are most susceptible to frost cracks. Once damaged, the injured area can split back open on very cold, winter days. An old sycamore on the MSU campus has a frost crack that opens as wide as a fist in the winter and closes during the summer. This wound may never fully heal and could create an entrance for decay organisms. 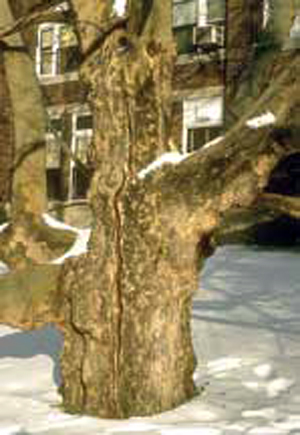 Frost crack damage on a tree.

Sunscald is another type of damage that can occur on trees as temperatures drop quickly. Much like frost cracks, it appears on the sunny side of the tree where warm bark may cause cells just under the bark to break dormancy that protects them from the cold. Sunset brings a rapid drop in temperatures, killing these normally dormant cells. Young trees with thin bark are more susceptible to sunscald. Damage from sunscald leaves bark with a sunken appearance where cells have died. Red maples along city streets often have small, oval-shaped dead patches on the trunk that eventually callus over as the tree continues to grow. In extreme cases, large areas of tissue can be damaged under the bark and will show up during the growing season as bark cracks and peels away, leaving wood exposed. Honeylocust, maple, apple, and linden trees are commonly damage by sunscald. 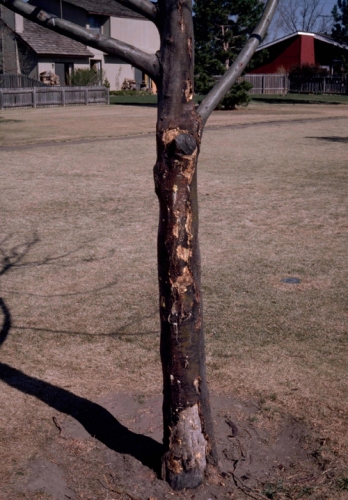 Protecting trees from damage is difficult since nature can produce great extremes in temperature and light conditions. Placing thin barked trees out in the open landscape can increase the likelihood of frost cracks and sun scald. Light-colored tree wraps can be used in the winter to help reflect the light off of the bark, reducing the warming of the cells and potential damage. Trunk wraps are only necessary on young, thin barked trees. Tree wrap should be removed in spring to prevent moisture from being trapped under bark which may cause fungal decay. Another way to protect trees with thin bark is to place smaller growing plants nearby that will shade the south side of the tree during the winter months.

For more information on frost cracks and sunscald, see “Bark Splitting on Trees” by the University of Tennessee Extension.