Fungicides can be divided into two groups: protectant and systemic fungicides. Protectant fungicides are contact materials that remain on the outside of the plant surface and kill fungal spores and hyphae upon contact, thereby preventing infection from occurring. Systemic fungicides are absorbed by the plant cuticle and underlying tissues and can act by killing spores and hyphae as well as incipient infections where the fungus has penetrated the plant surface. When they stop infections and prevent symptoms from developing they are called “curative.” However, symptoms that are already present will not be “cured” by the fungicide in question. After symptoms appear, some fungicides can reduce or inhibit fungal sporulation: these are called “anti-sporulants.” The term “eradicant” is often used for products like lime sulfur, which kills overwintering fungal structures in woody plant tissues when applied as a dormant spray. However, eradicants seldom eliminate all overwintering inoculum. Occasionally people use the term “eradicant” for very effective fungicides (e.g., Ridomil) that prevent current-season infections to the point that the disease appears to have been eradicated. The term “translaminar” refers to the movement of a fungicide from one side of the leaf to the other, providing disease control on both sides of the leaf.

Systemic fungicides are systemic to different degrees, with some fungicides being locally systemic (they move only a short distance away from the spray droplet, e.g., Elevate), others being more mobile in the plant (systemic) and able to move to the tip of the leaf or shoot (Orbit, Rally, Abound), and yet others being highly systemic and able to move throughout the plant including the roots (e.g., ProPhyt, Aliette). Most systemic fungicides are highly effective against their target pathogens regardless if they are locally systemic or systemic. However, products that are more systemic tend to have longer post-infection activity because they penetrate deeper into the plant tissues and are able to catch more advanced infections. In the latter case, the higher the rate used, the better the post-infection activity.

Both protectant and systemic fungicides are effective when applied before infection occurs, but only systemic fungicides have efficacy after the fungus has penetrated the plant (for a limited time, e.g., 24 to 72 hours, depending on the fungicide, disease, and rate used). Since systemic fungicides are absorbed by plant tissues and get redistributed in the plant, they tend to be less susceptible to wash-off by rain compared to protectant fungicides, which remain on the outside of the plant. A general rule of thumb that is often used is that one-inch of rain removes about 50 percent of the protectant fungicide residue and over two inches or rain will remove most of the spray residue. However, newer “sticky” formulations (e.g., Bravo Weather Stik, Dithane Rainshield) and fungicides applied with spreader-stickers may be more resistant to wash-off by rain. Also, fungicides and formulations differ a lot in their ability to adhere to plant surfaces. Therefore, research is needed to describe the effect of rainfall on wash-off on specific products.

In addition, protectant fungicide residues naturally decrease over time due to weathering, such as degradation by sunlight (UV radiation), heat or microbial activity, and redistribution over the plant surface by rainfall, dew or irrigation water. Growing tissues will also add to the fungicide dilution effect. In contrast, the concentration of systemic fungicides is reduced mainly due to redistribution and dilution in (growing) plant tissues as well as possible breakdown by the plant itself. A high pH of water used in the spray tank can result in alkaline hydrolysis (breakdown) of some fungicides, notably Captan. Most protectant fungicides are good for about seven to 14 days of protection, and systemic fungicides for seven to 21 days depending on the product, the rate applied, weather conditions, and disease pressure.

Recent research at MSU with fungicides against Phomopsis in grapes shows that one-day-old residues of fungicides are removed from the grape leaf surface by rainfall at different rates: for instance for Ziram, 0.1 inch of rain removed 25 percent of the residues, 0.5 inch of rain 30 percent of the residues, one-inch of rain 65 percent of the residues, and two inches of rain 75 percent of the fungicide residues. However, fungicide activity remained pretty good despite low residues remaining even after two inches of rain. In comparison, Captec tended to stick better, with a 50 percent reduction after two inches of rain. Efficacy was reduced slightly but was still very good with whatever residue remained. Surprisingly, even residues of Abound, which is a systemic material and considered rainfast, were reduced by rainfall, which suggests that a certain proportion of the fungicides remains on the outside of the plant, probably in/on the cuticle. However, disease control efficacy of the remaining Abound was barely reduced. Efficacy may be reduced more with older (e.g., one-week-old) fungicide residues where less active ingredient remains. We will investigate that this year.

The question sometimes comes up if it is better to apply a protectant fungicide before or after rain, since it can wash off during the rain event. As you can see from the grape study, fungicide efficacy was still good even after two inches of rain in grapes. However, this only applies to new fungicide residues. Older residues may not be as robust. The other problem is that if extended wet conditions or wind prevent fungicide application soon after an infection period, it may be too late to obtain disease control. I would suggest that a recently applied protectant fungicide should be re-applied if more than two inches or rain fell or after 1 inch of rain if the residue is seven days old or older. A little bit of rain is not all bad, as it can help to distribute the fungicide residue over the plant surface. Be sure that the fungicide has dried well before the rain, otherwise it will be lost immediately. Most systemic fungicides are rainfast after a few hours, but a longer period (up to 24 hours) may be needed for some fungicides to get fully absorbed by the leaf or fruit surface. 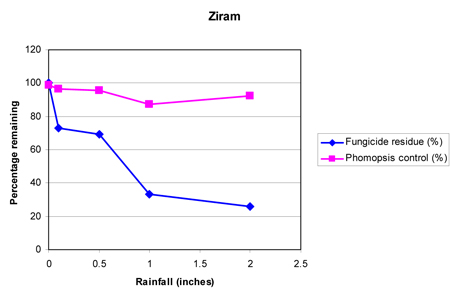 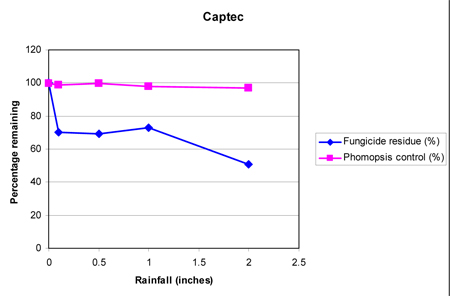 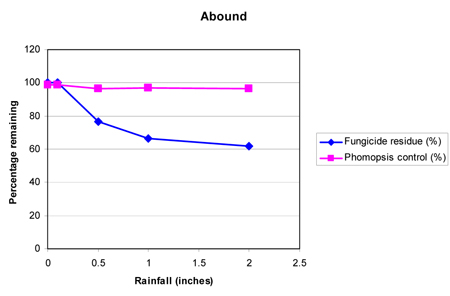