Protection of tart cherries from European brown rot infection is critical in 2013. Here are Michigan State University Extension recommendations on fungicide use strategies.

An outbreak of European brown rot blossom blight has been observed this year (2013) on Montmorency tart cherries in northwest Michigan (Photo 1). (For more information on this outbreak, see the accompanying Michigan State University Extension article, “European brown rot blossom blight outbreak on Montmorency tart cherries.”) In some cases, entire orchard blocks were heavily infected, while in other orchards, infected groups of trees were found in low areas within the orchard or close to windrow tree borders or woods on at least two sides. When symptoms were first observed, the European brown rot fungus was sporulating on blighted flower tissue (Photo 2). 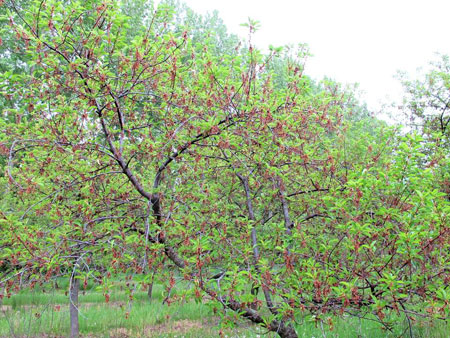 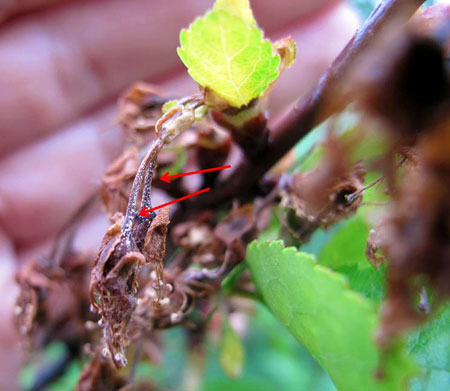 Photo 2. Sporulation of the European brown rot fungus (denoted
by arrow) on pedicels of blighted flowers.

Protective fungicide applications targeting brown rot are usually initiated approximately three weeks prior to harvest if conducive conditions are present (temperatures in the 70s accompanied by rain). In orchards where European brown rot symptoms are present, we suggest that the fungicide combination Gem 500SC (3.8 fluid ounces per acre) and Captan 80WDG (1.75 to 2 pounds per acre) be applied approximately one month prior to projected harvest. Gem has been shown to have anti-sporulation properties against the American brown rot fungus in studies conducted on peaches – about a 70 percent reduction in spore production from an infection source – conducted by Norm Lalancette in New Jersey. We anticipate that Gem will have similar anti-sporulation effects against the European brown rot fungus. The Gem + Captan spray will also provide effective control of cherry leaf spot and powdery mildew.

This Gem + Captan application should be followed by an aggressive Indar + Captan program involving multiple applications closer to harvest. With the Section 24(c) label for Indar use, the amount of Indar applied for brown rot fruit protection should be 9 to 10 fluid ounces per acre. Note that the Indar + Captan combination may not provide adequate cherry leaf spot control due to sterol inhibitor fungicide resistance in the leaf spot pathogen.

As such an extensive European brown rot outbreak has not been previously seen in Montmorency tart cherries, we have much to learn about this disease. We will be conducting further work on this disease next season.