Light spring frost created some concerns for freeze and frost damage to early season blueberries and pollination problems to varieties that were in the late pink bloom stage.

To verify any damage that might have occurred as a result of the freezing temperatures that occurred during the freeze/frost period in small fruit crops located in Allegan and northern counties, Michigan State University Extension toured several fields representative of the small fruit crops at risk. Our observations indicate that the only affected small fruit crop is blueberries. Day-neutral strawberries had only a few flowers damaged around Hudsonville, Mich., and raspberries were unaffected.

Some blueberry fields were slightly damaged by freezing temperatures during midnight of May 12 and early hours of May 13. After inspecting flowers and flower buds in several fields located in Ottawa and Allegan counties, we found some frost/freeze damage in blueberries that were already in the late pink stage or flowers were already open. Most affected fields were located south of Allegan County.

Varieties sampled were Bluecrop, Jersey, Rubles and Elliott. Even though the period of freezing temperatures was less the four hours (Table 1), the damage was of consideration on early season varieties. At this time, some of the early varieties had 10 to 15 percent of flowers open and had a large percentage of flower buds in the late pink stage. Upon opening and examining those flowers and flowers buds, we found frost damage in open flowers and stamens in late pink buds where no frost protection was activated (Photos 1-2). Most affected varieties so far are Bluecrop and other early season varieties. Meanwhile, fields of Jersey, Rubles and Elliotts are not affected. 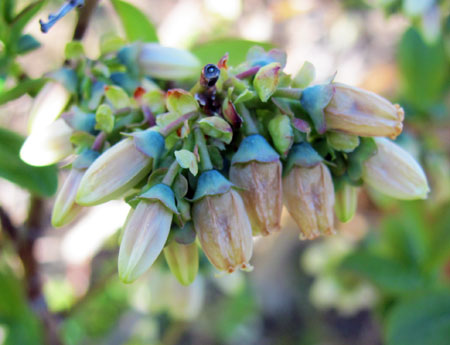 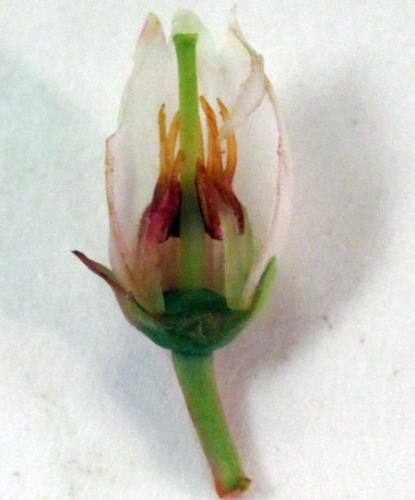 Blueberry fields north of Allegan County like Ottawa, Muskegon and Kent counties seem to be unaffected because their bloom period is several days behind that observed in southern counties. We examined several Bluecrop fields in Ottawa County and no damage was observed. However, there are cold spots where the temperatures were in the lower 20s that may have affected varieties that were in the late pink stage.