Little winter flower bud damage and delayed bloom may be advantageous for blueberry production in 2013.

Cold and rainy weather are preventing blueberries from an early bloom which may result in lower risk for spring frost and may reduce need for multiple periods of frost protection. In addition, little or no flower bud mortality due to winter conditions, except on fields affected by de-icing road salt, may also increase chances for a large blueberry crop in Michigan this year.

In 2013, the weather in Central Michigan has been significantly different from the environmental conditions that occurred during spring 2012. Cold and rainy weather prevents blueberries from an early bloom,  which may lower the risk for spring frost and less use of water for frost protection.  Although these conditions may seem to be unseasonal, they are closer to weather from previous years when we have observed a late bloom season for most fruit crops, including berry crops. For the past seven days, climatic conditions have been characterized by periods of heavy rain, and snow showers with average minimum temperature around 35 degrees F and maximum temperatures around 47 degrees F. Cumulated precipitation during the same period amounted to 3.5 inches of rain with some areas receiving up to 5.8 inches during the same period.

So far, the prevailing low temperatures are keeping fruit crops in dormancy, including blueberries.  However, since most fruit crops have already completed their resting stage, short periods of warm weather when the temperatures have reached the upper 50s are already advancing the early stages of flower buds development.

As of, April 16, 2013, blueberries in the area are still dormant but ready to start development with the first signs of warm weather. For example, thanks to mild temperatures that occurred during the past seven days, we are seeing the beginning of the bud swell stage in early varieties in places located in Allegan County and southwest Michigan in general. North of Allegan County (Ottawa, Muskegon, Oceana, Kent County, etc.) blueberries will start development as soon as the average temperature starts rising up above 47 degrees F.

Compared to 2012, when we had an unseasonal warm winter and blueberries suffered no winter damage, this year blueberry fields are showing a little damage but nothing that can be considered a serious problem. A winter damage evaluation conducted at the end of March in fields located in Ottawa, Kent and Allegan County showed an average 3 to 6 percent flower bud damage caused by winter conditions. However, this might be considered the “normal” winter damage that occurs every year in Michigan’s blueberry fields.

Although winter damage in well-tended blueberry fields is minimal, in fields that in 2012 suffered extensive spring frost damage and later on were affected by the summer drought, the damage is more intense due to weaker conditions of the plants. In those fields, flower bud damage goes from 30 to 60 percent. This condition is affecting mainly fields that do not received supplemental irrigation or had limited access to irrigation during the growing season. 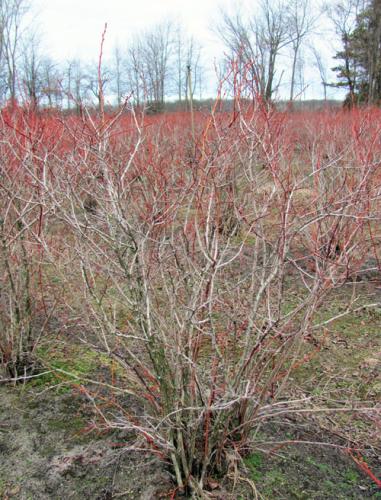 A completely different situation occurs with blueberry fields located alongside major highways in Ottawa and Allegan County. Those fields were severely affected by de-icing road salt blown onto the fields by passing vehicles. The combination of winter and salt damage caused blueberry rows facing the road, 30 ft. away, to have up to 100 percent flower bud mortality. The damage decreased with an increase in the distance from the road.  Damage in blueberry plants more than 100 ft. away from the road varied from 29 to 38 percent, depending on the major highway. 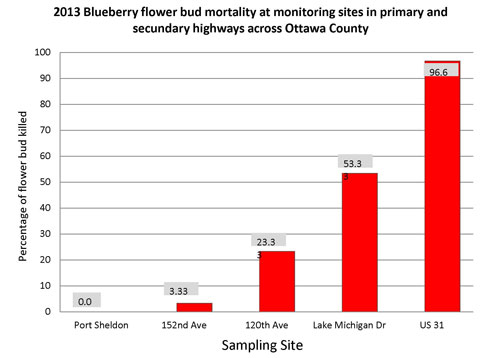