So far this spring Michigan State University Extension is seeing generally lower grape berry moth pressure than recent years, with samples in the past few weeks showing 0 to 6 percent of clusters with evidence of grape berry moth damage from the first generation. The sites with the higher of these levels are those nearest to wooded borders, but the pressure declines rapidly as you get further into these vineyards. Growers who are managing their vineyards for harvest in 2013 should now consider protecting berries from grape berry moth at the higher pressure locations, as the second generation of this pest can infest berries and lead to later cracking and splitting of fruit as the berries start to swell.

The MSU Enviro-weather model for grape berry moth predicted the start of the second generation egglaying around July 4-6, 2013, at the Scottdale Enviro-weather station. Depending on the date when you set biofix back in late May, and depending on your location in Michigan, this predicted start of egglaying could be a few days to a week or more later. The predicted start is based on 810 growing degree days accumulated since the date of wild grape bloom. Growers in more delayed sites such as those in northwest Michigan should expect this egglaying to start in mid- to late July. 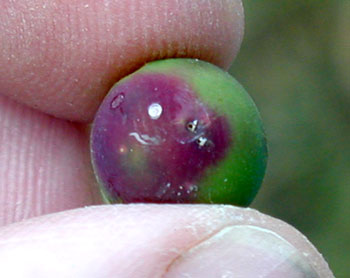 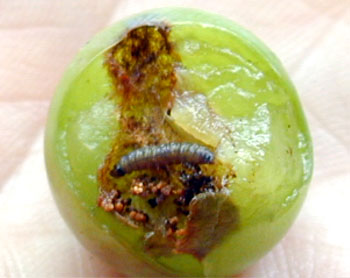 The predicted start of egglaying is the optimal timing for application of insecticides that are active on eggs and young larvae, such as Intrepid, Altacor or Belt. For these products, excellent cluster coverage is essential, but once it is on the clusters, long residual control of grape berry moth (two to three weeks) and rain-fastness are achieved. For products that are broad-spectrum such as the pyrethroid, organophosphate and carbamate insecticides that are best timed for when the larvae hatch from the eggs, applications should be delayed to be timed 100 growing degree days later, at 910 growing degree days from wild grape bloom. For the locations in far southwest Michigan, this will be four to five days later based on the predicted temperatures for the coming week.

In our recent research trials, spray programs that timed applications for berry moth control based on the growing degree day model outperformed those that used a calendar approach. This was the case for broad spectrum insecticides, and even better control was achieved when we tested growing degree day timed sprays using some of the new insecticides that are highly active and long-lasting for berry moth control. For example, a program using Intrepid at 8 ounces per acre applied at 810 growing degree days followed by Altacor at 3 ounces per acre applied at 1,620 growing degree days provided similar or slightly better control than a Sevin and Imidan program in the mid- and late season timings. Altacor also has activity against Japanese beetles, which were first seen this week in scouting across southern Michigan, making it a useful tool for mid-season control when both pests are present. Belt has a similar mode of action to Altacor and is less expensive, but it is more selective and does not provide Japanese beetle control.

Other pest insects may be important in your vineyards, but if you are focusing on berry moth control, growing degree day-timed applications of long-lasting and active insecticides applied with excellent coverage provides an effective program to reduce pressure from this pest.

MSU will host a virtual field day about viticulture in late July.