Green light: Is it important for plant growth?

Green light is considered the least efficient wavelength in the visible spectrum for photosynthesis, but it is still useful in photosynthesis and regulates plant architecture.

Sometimes one may hear that plants don’t use green light for photosynthesis, they reflect it. However, this is only partly true. While most plants reflect more green than any other in the visible spectrum, a relatively small percentage of green light is transmitted through or reflected by the leaves. The majority of green light is useful in photosynthesis. The relative quantum efficiency curve (Photo 1) shows how efficiently plants use wavelengths between 300 and 800 nm. Green light is the least efficiently used color of light in the visible spectrum. 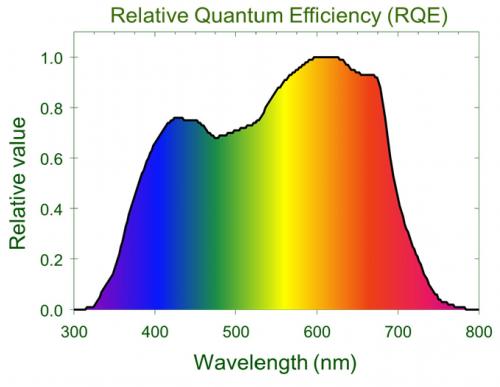 As a part of a series of experiments performed in enclosed environments, Michigan State University Extension investigated how different wavebands of light (blue, green and red) from LEDs influenced growth of seedlings. We grew tomato ‘Early Girl,’ salvia ‘Vista Red,’ petunia ‘Wave Pink,’ and impatiens ‘SuperElfin XP Red’ in growth chambers for four to five weeks at 68 degrees Fahrenheit under 160 µmol∙m-2∙s-1 of LED or fluorescent light. The percentages from each LED color were: B25+G25+R50 (25 percent of light from blue and green LEDs and 50 percent from red LEDs); B50+G50; B50+R50; G50+R50; R100; and B100.

Plants grown with 50 percent green and 50 percent red light were approximately 25 percent shorter than those grown under only red light, but approximately 50 percent taller than all plants grown under more than 25 percent blue light (Photo 2). Therefore, blue light suppressed extension growth more than green light in an enclosed environment. Twenty-five percent green light could substitute for the same percentage of blue light without affecting fresh weight. However, the electrical efficiency of the green LEDs was much lower than that of blue LEDs. To read more about this experiment, please read “Growing Plants under LEDs: Part Two” in Greenhouse Grower. 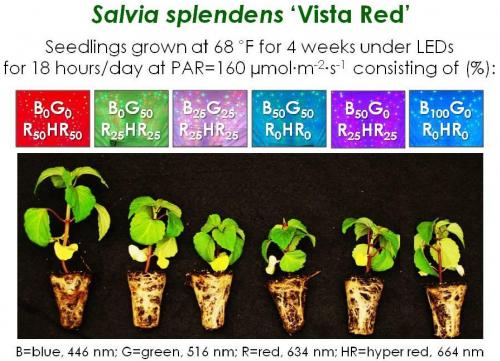 Photo 2. Salvia grown for four weeks under the same intensity of blue (B), green (G) and red (R) LEDs or fluorescent lamps (FL). The number after each color represents the percentage of that color, e.g., B50+R50 means that plants were grown under 50 percent blue light and 50 percent red light.

One potential advantage of including green in a light spectrum is to reduce eye strain of employees. Under monochromatic, or sometimes two colors of light such as blue and red, plants may not appear their typical color, which could make noticing nutritional, disease or insect pest issues difficult. Another potential advantage of green light is that it can penetrate a canopy better than other wavebands of light. It’s possible that with better canopy penetration, lower leaves will continue to photosynthesize, leading to less loss of the lower leaves.