Amaryllis is one of the most widely grown bulbs worldwide and comes in a beautiful array of colors and flower types.

The large, colorful blooms of amaryllis can brighten any room. What is sold as a winter blooming ‘amaryllis’ is actually in the genus Hippeastrum and is native to South and Central America. They are cultivated in South Africa, Israel and the Netherlands and sold as a winter blooming bulb for growing indoors. True amaryllis (Amaryllis belladonna) is native to South Africa and is typically grown outdoors in areas that are zone 7 and warmer.

Over the years, single, double and miniature hybrids of Hippeastrum have been developed. The typical range of flower colors include white, red, pink, orange, salmon, pale chartreuse and bicolored, white with brush strokes of pink or red. Depending on the species used to create the hybrids, they may have rounded, pointed or spidery petals. They usually have two 12-20 inch stems producing four showy, trumpet-like flowers. The name amaryllis is commonly used instead of Hippeastrum for these bulbs, and will be used for the remainder of this article.

Amaryllis bulbs are widely available this time of year, sold either as bare root bulbs or as kits that include the bulb, a pot and potting medium. They are best started between October and January. The boxes show huge, brightly colored blooms atop sturdy green stems, but there are a few steps needed to achieve the perfect picture on the package.

Michigan State University Extension recommends keeping bulbs stored in a cool location, about 50 degrees Fahrenheit, before planting. For bare root bulbs, use a soilless potting medium such as a mix of peat and perlite that is well-drained. Be sure the potting medium is moist when you use it or it may end up repelling water. Plant each bulb in a pot that leaves about 1 inch in diameter between the side of the pot and the bulb. For larger bulbs, this is typically a 6- to 7-inch pot.

Fill the pot about half full with potting mix packed down lightly, place the bulb in the pot nose up, and continue filling and firming the potting mix around the bulb until about a third of the bulb is above the potting mix. The final level of the mix should be about 0.5 inches below the rim of the pot to allow for watering. Water lightly with lukewarm water to settle the potting mix around the bulb. To prevent rot, avoid watering over the nose of the bulb. Don’t water again until green growth starts to appear. After that, water about once a week or when the top inch of potting medium is dry.

It can take two to eight weeks for growth to begin and about eight to 12 weeks from the time bulbs are potted to when they begin to flower. Set the pot in a bright, sunny location such as a south-facing window or sunroom with a room temperature of 70-75 F. Plants that receive inadequate light or heat during this growth period may have paler 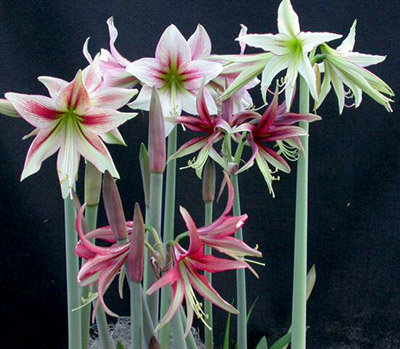 colors and longer leaves. Once plants are in flower, keeping them in a slightly cooler area of about 65 F and out of direct sunlight will help extend the life of the flowers. Turn the pot frequently to keep the flower stalks from leaning toward the light. Stakes may be used to keep flower stalks from flopping over.

Some people discard amaryllis bulbs after they have flowered rather than attempting to keep them over to re-bloom another year, but it can be done. After the last bloom is over, cut the flower stem back a few inches above the bulb, but keep the leaves. Put the plant in a sunny window, preferably south-facing, water when the top inch of potting mix is dry to the touch, and begin fertilizing with a balanced, water-soluble fertilizer such as 10-10-10 once a month.

In spring after the danger of frost has passed, put the pot outdoors in a sunny location, water when needed to keep the plant evenly moist and fertilize every two weeks with a balanced fertilizer. In fall after a light frost, bring the pot back indoors, cut the foliage off just above the bulb, and store it dry in a cool (55 F), dark place such as a basement for eight to 10 weeks. The bulb needs the two to three month period of cool temperatures in order to re-bloom. After that, it can be repotted and grown according to the directions given above.

For additional tips on how to regrow amaryllis bulbs, and a gallery of photos of different cultivars, see “How to Make Your Amaryllis Bloom Again” from the United States National Arboretum.

A native Michigan shoreline: We did it, so can you! Part 2