Use MSU Enviroweather to determine whether heat units where you are located are behind, ahead or even as compared to normal.

I was talking with a grower who lives near Michigan’s Huron/Sanilac County line a few days ago and he mentioned his concern that heat units were way behind and thought corn would have a tough time maturing. His assessment matched my experience for the summer thus far.

A couple days later, I was talking with another grower who lives about 15 miles south of the first grower. He mentioned how happy he was that heat units seemed to be right on schedule. The differences in the two observations prompted me to look up the following map generated by Michigan State University Enviroweather. 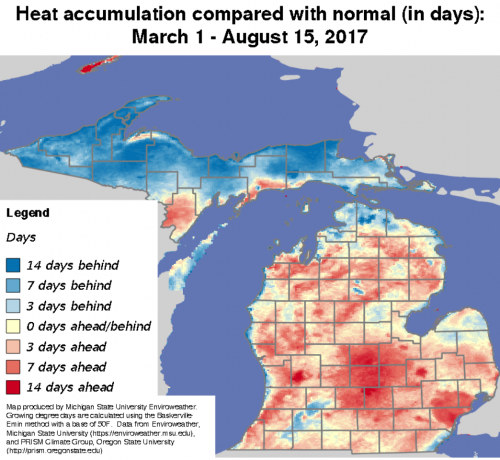 Another tool available on Enviroweather are maps that show the average dates when areas reach a particular accumulation of growing degree-days (GDD) base 50 degrees Fahrenheit. Measurements begin March 1. 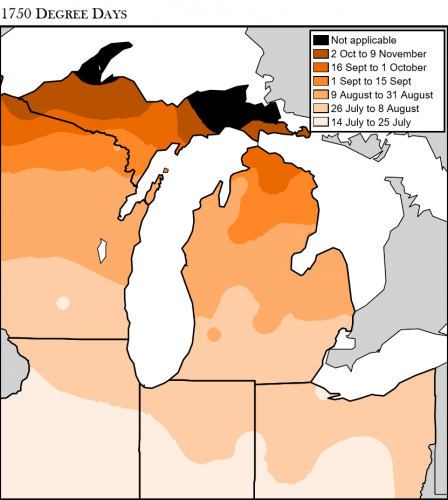 This particular map shows the southern couple tiers of counties reach 1,750 GDD on average in mid- to late July, most of the center of the state late July to early August, and the northern part of the Lower Peninsula, as well as the Delta County region, mid- to late August. Parts of the Upper Peninsula don’t typically ever reach 1,750 GDD base 50 during the typical growing season.

Growing degree-days as well as other useful weather-related management tools are available on MSU’s Enviroweather website.