Anyone who has gone to a pumpkin patch knows pumpkins can get so heavy they’re hard to lift, but some pumpkin enthusiasts produce pumpkins so big they need to be lifted by forklift! The production of giant pumpkins is a hobby and occasionally a small aspect of a pumpkin operation, but breaking into the world of thousand-pound (or more) pumpkins involves complex genetic lineages, specialized care, some money and a great deal of passion.

Even a 1,700-pound pumpkin starts from one single seed, but obtaining these seeds isn’t as easy as picking up a pack from a garden center. While most giant pumpkins are descendants of commercially available varieties, careful breeding by growers helps them obtain their enormous size. Like race horses with detailed records of parentage, giant pumpkins have detailed linages that assure their size.

The seed is the result of careful crossing of different pumpkin plants, often obtained from a network of fellow giant pumpkin growers. For example, a grower will get the seed from a pumpkin that weighed 1,500 pounds, plant it, and when it blossoms, cross it with another pumpkin plant grown from a seed taken from a pumpkin that weighed 2,000 pounds. This ensures the resulting pumpkin comes from winning stock, but since breeding is a numbers game, it does not ensure every plant from the cross will produce larger fruit than its parents. Seed prices are not for the faint of heart, as it is often auctioned off and can go for over $1,000 a seed. 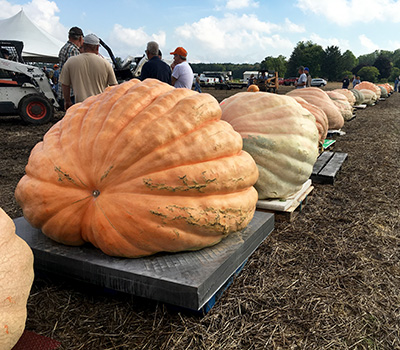 Giant pumpkins are often referred to by their linage, with the format being “Last Name of Grower, Weight.” For example, Sparty 1,855.

Genetics alone isn’t enough to produce a pumpkin weighing more than an entire family, it also takes a lot of hard work and diligence. The pumpkin has to be carefully tended through watering, fertilizing and pruning so all the plant’s energy goes into just one pumpkin fruit. This may mean training vines so they grow in certain directions, a significant task since large pumpkins come from large plants that can cover 2,000 square feet or more. The goal is to maximize the amount of sunlight received by the leaves as well as the amount of water and nutrients available to the roots, helping it reach extreme weight and size.

Large pumpkins will need daily attention. Producers are either watering, fertilizing, pruning, covering and otherwise caring for them much like a pet. Plants are allowed to only have one fruit, but that fruit can’t be allowed to set until the plant reaches a certain size otherwise the plants can’t continue to size a plant at the same time it is sizing a fruit. Since pumpkins put out roots at the nodes, these roots need pruning, otherwise the vine becomes anchored and as the fruit expands in size, it can actually break the fruit off the plant.

People who have seen giant pumpkins often ask not only about their size, but also their shape and coloring. Rarely do they have the perfect round shape and orange color, which people expect but is rarely possible as these giants need protection from the elements. While it is key leaves get sunlight, when the pumpkin fruit is exposed to direct sunlight the exposed area hardens and becomes resistant to expansion, which causes the fruit to crack. To combat this, growers cover the fruit with tarps or a sheet, which causes the pumpkins to be white or a pale orange.

The shapes of giant pumpkins rarely resemble the perfect orb of Cinderella’s pumpkin carriage. This is due to their rapid growth and weight gain. These pumpkins put on as much as 40 pounds a day and the rapid weight gain causes the fruit wall to collapse.

A variety of shapes and sizes at a giant pumpkins weigh-off in Dundee, Michigan. The winning pumpkin in this line-up weighed over 1,700 pounds.

If you are interested in getting into the production of these behemoths, there are many resources and forums available online, though it should be known that producing these pumpkins is an intensive hobby. Also, keep in mind that many of the secrets to large pumpkin production are safely guarded, and don’t expect a prize winner on your first attempt. While there can be money in winning giant pumpkin weigh-offs or when the right customer is found, generally this isn’t a venture entered for profit. Those interested in seeing a giant pumpkin can look online for giant pumpkin weigh-offs, which occur in over 35 states.