2012 drought reduced the impact of biological control of gypsy moths.

Many samples of damaged plants coming into Michigan State University Extension offices this past spring 2013 were the result directly or indirectly of last year’s drought. Tree and shrub samples of dead or partially dead branches showed stems that barely grew 0.5 inches in 2012, but had been growing 2 or more inches in previous years. The drought of 2012 may be quickly forgotten by us, but plants may take years to recover from its impact. 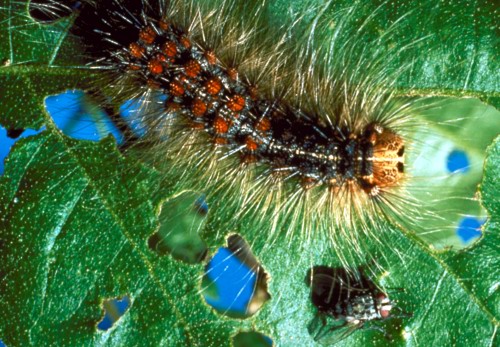 An indirect impact of the drought in 2012 was the increase of gypsy moth caterpillars in southeast Michigan this spring. A similar drought in 2007 led to localized growth in gypsy moths in areas of Washtenaw County the following spring. Populations of caterpillars increased from a few dozen to thousands in localized areas, resulting in feeding that stripped trees of much of their foliage. A few landowners stated that they had not seen this kind of defoliation in over 10 years.

Gypsy moth populations surged across the state during the 80s and 90s, defoliating many woodland areas. At that time, gypsy moths were fairly new to this state and, like any introduced species, its population grew rapidly without normal control from parasites, pathogens and predators. During this period, the Michigan Department of Agriculture and Rural Development oversaw a program to reduce the impact of gypsy moth damage with the goal of building a biological balance of parasites, pathogens and predators. At that time, a bacterium, Bacillus thuringiensis 'Kurstaki' (BtK), was used as an aerial spray over infested woods, reducing damage and gypsy moth populations while allowing other biological controls to develop.

Overtime, birds started to feed on caterpillars, tiny wasps parasitized eggs, and a virus attacked and killed off caterpillars where gypsy moth populations were very large. These biological controls were pieces of the puzzle in nature’s management of gypsy moths, but it still did not consistently keep the pest in check.

A real break came when a soil borne fungus, Entomophaga maimaiga, started to kill off large numbers of caterpillars in Connecticut in 1989. Gypsy moth caterpillars infected with the fungus would die, hanging vertically head down along trunks of trees. Once the fungus was introduced into Michigan and other areas where gypsy moths were present, it had significant impact causing populations to die off in large numbers. Data across 11 states showed a decrease in gypsy moth populations of 85 percent in 1996 over the previous year according to Anthony Shelton, professor of entomology at Cornell University. 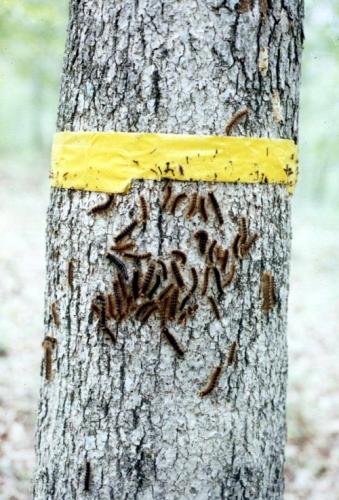 The fungus develops during periods of consistent rainfall in late spring and early summer and still has some development during drier periods, but fewer caterpillars are killed. After the droughts of 2007 and 2012, greater numbers of gypsy moth caterpillars survived into the moth stage (in Washtenaw County), producing greater numbers of eggs during those summers. Each egg mass can contain 400 to 600 eggs.

What is to be done to protect local properties from being defoliated? Bands of Tanglefoot wrapped around tree trunks entangles caterpillars as they climb up trunks to feed on leaves. Usually banding is most effective when protecting trees out in the open where the only way up into the canopy to feed on leaves is by climbing up the trunk. In the woods, caterpillars can easily crawl from one branch to branches of nearby trees, rendering the banding of one tree useless.

The answer is still a balance of nature. Entomophaga maimaiga fungus is still our greatest tool in the management of gypsy moths. Resting spores of E. maimaiga can survive for years in soil litter, becoming active during normal spring and early summer conditions. Extended rainy periods this past month created conditions for the development of the fungus. Infected gypsy moths should begin to show up in the last stages of the caterpillar’s development in early summer. Caterpillars killed by the fungus are found hanging vertically head down along trunks of trees.

At this point in the season, do not fertilize trees that have had a significant loss of leaves. Trees that have lost leaves will begin to develop new ones. If conditions are dry during this period of new leaf development, be sure to provide water.