Fertilizer application is meant to improve crop yields, but it can also have a residual impact on soil fertility for one or more years after the crop is removed. Farmers in Michigan’s Chippewa County are interested in improving hay production, but need to keep costs down.

A low-input, single-cut hay field on the Berkompas farm north of Rudyard, Michigan, typical for the area, was selected for a Michigan State University Extension demonstration project. Primarily timothy and birdsfoot trefoil, the field receives light manure application every few years and no commercial fertilizer.

Fertilizer rates for a yield goal of 2 tons dry matter per acre, including “no fertilizer”, “crop removal rate” and “build-up rate,” as well as “no lime” and “1 ton per acre-surface applied” were included in the three-year demonstration. Including 50 pounds nitrogen per acre when fertilizing may improve yields substantially at a relatively low cost. Fifty pounds of nitrogen per acre was included in the 2015 fertilizer blends, but not repeated in the 2016 blends. The fertilizer rates were as follows.

The project is strictly a side-by-side demonstration. No replication is included. As a result, the data collected cannot be considered research quality. It does, however, accomplish the purpose of demonstrating the potential impact of fertilizer use at carefully considered rates of application. A yield check on Aug. 5, 2016, showed the following in the table below.

Based on this yield check, repeat annual applications of crop removal and build-up fertilizer rates in 2015 and 2016 suggests improved hay yields in 2016, compared to 2015-only fertilization, but at a higher cost per ton of dry matter.

The first two years of this demonstration suggest that fertilizing at crop removal or build-up rate every other year may provide a more economic approach to increasing hay yields. Yield checks will be collected from all treatments in the summer of 2017 to complete the demonstration project.

Graphic representations of the changes in pH, phosphorus and potassium soil test levels from May 2015 through May 2017 based on fertilizer and lime treatments follow. 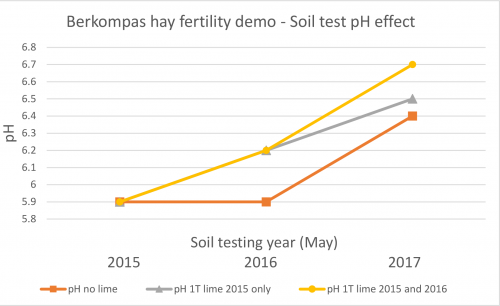 Figure 1. Soil pH following lime application at 1 ton per acre surface applied in May 2016 and May 2017.

Figure 2. Soil phosphorus (P) following phosphorus fertilizer application in 2015 only, and 2015 plus 2016 at two rates: crop removal (calculated for a 2 ton per acre dry matter yield) and build-up as recommended by the MSU soil test reports. 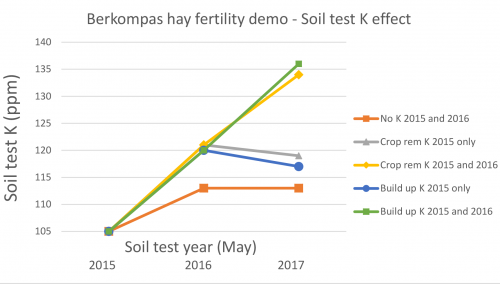 Figure 3. Soil potassium (K) levels following potassium fertilizer application in 2015 only, and 2015 plus 2016 at two rates: crop removal (calculated for a 2 ton per acre dry matter yield), and build-up as recommended by the MSU soil test reports.

The impacts of lime and fertilizer application at the two rates provide an interesting look at what happened over two years in this lower fertility soil. In Figure 1, the apparent increase in soil pH from 2016 to 2017, even on unlimed soil, is hard to explain. However, the relative pH between the treatments is what was expected with the soil receiving two years of light lime application displaying higher pH than both other treatments.

Figure 2 suggests that the build-up phosphorus application, in 2015 only and in 2015 plus 2016, resulted in the most increase of soil test P. Figure 3 indicates that potassium increased more under the two consecutive years of application of build-up and crop removal rates than under a single 2015 application of either rate.

Watch the MSU Extension Field Crops page for a follow-up article in late summer to wrap up the demonstration.

Cost of renovating hay or pasture fields in northern Michigan

Planning for forage success this spring

When should I harvest my small grain forage?