Scouting for summer problems such as insect pests can potentially save time and boost profits.

As forage producers approach first cutting in 2015, they should consider their scouting program and prepare for challenges that may occur as a result of any or all of the following: insect pressure, disease outbreaks or fertility deficiencies. This initial article will be part one of a three-part series and will address major insect pests for alfalfa and some management practices producers may choose to incorporate into their management system.

Alfalfa weevil, Hypera postica, is a key pest that is predominantly kept in check by biological controls such as parasitic wasps that were introduced starting in 1957. The biological controls share two attributes that have been keys to their success. First, their seasonal histories are well synchronized with the alfalfa weevil seasonal history. Second, the successful natural enemies tend to be "resistant" to harmful effects of alfalfa harvesting.

Beginning in mid-May, producers should scout their alfalfa fields for signs of alfalfa weevil chewing and skeletonizing leaves. Sweep nets should be used early to detect adults, and then begin larval scouting. Sample 20 stems in five different locations of the field and look for feeding damage and larvae. Michigan State University Extension recommends that a threshold before first cutting should have 40 percent of stems damaged, plus live larvae present. This does not mean 40 percent defoliation!

If damage exceeds threshold within seven to 10 days of a planned harvest, control the pest outbreak by harvesting the hay as soon as possible. Cutting kills most alfalfa weevil larvae, pupae and some adults. If harvest is more than 10 days in the future, weevil outbreaks should be controlled by spraying the field as soon as possible. If harvesting early, check new growth of second cutting for signs of damage. Several insecticides are available. See a list of registered insecticides for alfalfa weevil control in Michigan.

A note of caution: Bee kind! Honey bees often visit alfalfa fields. Insecticides, with the exception of Bt, are HIGHLY TOXIC to honey bees. Avoid spraying when bees are present by shifting application timing to early or late in the day. Even better, if the crop is in bloom, cut alfalfa to reduce pest numbers rather than spray. 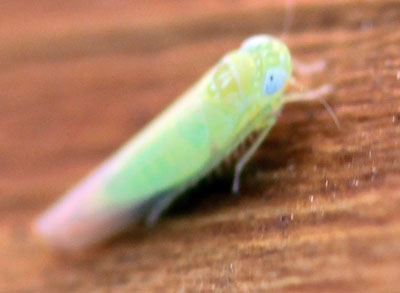 Scouting for potato leafhoppers should begin the first week of June. Five sets of 20 sweeps using a sweep net should be taken in several parts of the field. Count all adults and nymphs. Thresholds vary according to plant height in inches:

These two insects do not represent all the insects that may be a problem; however, economically they are the two major pests for Michigan alfalfa producers. Other insects that may be a problem include alfalfa blotch leafminers, pea aphids, spotted alfalfa aphids, armyworms, clover root curculio, cutworms, grasshoppers, several leaf beetles, alfalfa plant bugs, tarnished plant bugs, slugs, spittlebugs and webworms.

Yellow, stunted alfalfa may not be entirely due to drought