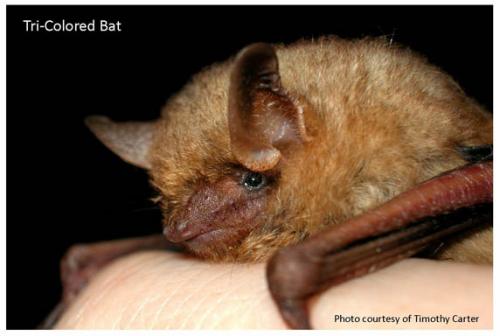 The Michigan Department of Natural Resources (DNR) Wildlife Division, working with researcher Dr. Allen Kurta of Eastern Michigan University (EMU), discovered several bat species hibernating in abandoned, manmade tunnels from Rockport’s historic mining days. Surveys of the tunnels have revealed three species of bats using these hibernacula. This includes the Big Brown, Little Brown and Tri-Colored (formerly known as the Eastern Pipistrelle) bat. Michigan DNR Wildlife Biologist, Bill Scullon, notes that these bat hibernacula are unique because Michigan’s Lower Peninsula lacks underground mines and caves that are essential for large populations of bats. Hibernating bats in these Rockport tunnels are an important northern Lake Huron discovery because it is one of only two known hibernaculum sites for bats in Michigan’s Lower Peninsula. The other is the Tippy Dam in Manistee.

A recent bi-national Lake Huron Biodiversity Conservation Report, co-authored by Michigan Sea Grant, identifies this region as an important area for protecting coastal habitats for a native and diverse species.  This report focuses on airborne migrants, like bats, and illustrates their ecological contributions as part of healthy, functioning ecosystems. Preserving this habitat, benefits the native Tri-Colored bat, a less common species found at Rockport but of special concern in Michigan. A greater bat conservation concern is whi 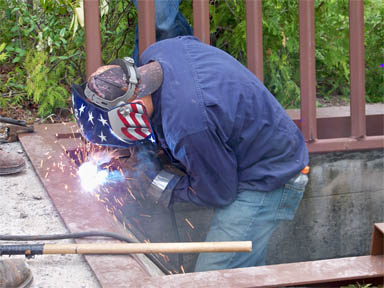 Including students as conservation partners, the Alpena High School’s 4-H welding club joined the project through the Northeast Michigan Great Lakes Stewardship Initiative. Welding students worked from DNR designs to fabricate two custom steel gates for both of the hibernaculum. Woodshop students also constructed summer bat houses to be placed onsite. The welded gates will now protect this hibernation habitat allowing bats access to the site while safely excluding the public from accessing the dangerous tunnel. This structure will help protect the bats’ habitat, eliminate disturbance to the site during their hibernation period and reduce the likelihood of contaminating the site, such as with white nose syndrome.

Teachers, Scott MacKenzie and Zach Grulke, promoted the educational value of real life experiences for the industrial arts students working on this project. It allowed students to get firsthand knowledge of the manufacturing process while contributing to their community and local habitat conservation. The students’ work is part of a community conservation effort, coordinated with the many various conservation and community partners involved, including Michigan DNR, EMU, U.S. Fish and Wildlife Service (USFS), Michigan State University Extension Michigan Sea Grant and 4-H Youth programs, Huron Pines AmeriCorps, Friends of Rockport, and the Organization for Bat Conservation. 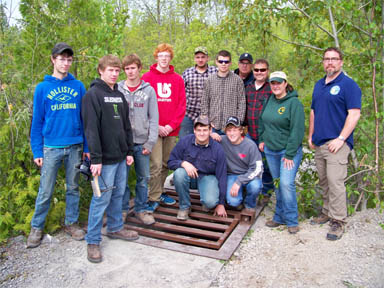 Plans for the site include insulating the tunnels with gravel to stabilize the temperature within the hibernacula. Also planned is the placing of interpretive signs on the outside to share information with the public about bat biology and their ecological importance, goals of this habitat conservation project, and history of Rockport. Since Rockport is open to the public, this project presents an opportunity for visitors to gain awareness about Michigan bats in the context of coastal Lake Huron habitats – enhancing the visitor experience for both community members and tourists, alike. Learning about local natural resources in this local community setting offers opportunities toward growing sustainable coastal tourism development opportunities in Northeast Michigan.