Just like farmers and gardeners across the Lower Peninsula who had to wait for warmer and dryer weather to begin their spring work in earnest, honey bee swarms began to show up in yards this week as the rains subsided and temperatures reached the low 80’s.These swarms are easy to collect by experienced beekeepers and are an important way for beekeepers to add colonies to their apiaries.

Honeybee swarms are the way honeybees produce new colonies. Swarming normally occurs in late spring or early summer when the old queen bee is more or less driven from the colony by a new queen bee. When the old queen leaves, she takes several hundred to several thousand loyal worker bees with her. Soon after leaving, the swarm takes up temporary residence in a small tree, shrub or even the side of somebody’s house. What happens next is pretty darn amazing. The following is taken from a University of California, Riverside web page at http://bees.ucr.edu/reprints/amsci94.pdf entitled Group Decision Making in Honey Bee Swarms.

“Bivouacked on a tree branch, a honey bee swarm of some 10,000 workers and one queen delegates the job of finding and choosing a new nesting site to just a few hundred scout bees. The other bees remain quiescent during the process, conserving energy. How the scout bees select candidate sites, deliberate among choices and reach a verdict is a process complicated enough to rival the dealings of any corporate committee. Once the scout bees have selected a new home, they stimulate the swarm to launch into flight and then steer it to its new domicile.”

Colony Collapse Disorder (CCD) is the most recent crisis affecting honey bee populations and was reported in the national news in 2007. The cause of this disorder is still unknown and honey bee scientists all over the country are studying the problem. Presently, most honey bee scientists think it might be a combination of several stresses including; pesticides applied inside the colony for controlling mites and other pests, insecticides applied to crops for insect control and brought back to the colony by bees. Additionally, other stresses such as migratory pollination service (moving bees for pollinating crops from state to state), novel pathogens, Varroa mites, and a limited gene pool of our honey bee’s have been suggested as causal agents for CCD. At this time there are no scientific results supporting these hypotheses. Check the ARS article on CCD for more information. 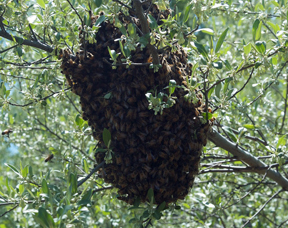