Wild, or feral, honeybees have been struggling ever since the Varroa mite and Tracheal mite were introduced into Michigan back in the eighties. During the nineties, one could go through an entire summer without seeing a single honeybee. They seemed to be on the verge of a come-back and then Colony Collapse Disorder came along and knocked them back down again. Maybe they are rebounding again, because last week I received several calls from homeowners about honeybee swarms in their yards. Each caller reported a basketball-sized clump of bees in one of their trees. The callers also expressed genuine concern for the bees but, understandably, they didn’t want the bees in their yards.

Honeybee swarms are the way honeybees produce new colonies. Swarming normally occurs in late spring or early summer when the old queen bee is more or less driven from the colony by a new queen bee. When the old queen leaves, she takes several hundred to several thousand loyal worker bees with her. Soon after leaving, the swarm takes up temporary residence in a small tree, shrub or even the side of somebody’s house. What happens next is pretty darn amazing. The following is taken from a University of California, Riverside web page at http://bees.ucr.edu/reprints/amsci94.pdf entitled Group Decision Making in Honey Bee Swarms.

“Bivouacked on a tree branch, a honey bee swarm of some 10,000 workers and one queen delegates the job of finding and choosing a new nesting site to just a few hundred scout bees. The other bees remain quiescent during the process, conserving energy. How the scout bees select candidate sites, deliberate among choices and reach a verdict is a process complicated enough to rival the dealings of any corporate committee. Once the scout bees have selected a new home, they stimulate the swarm to launch into flight and then steer it to its new domicile.”

My friend Walter Pett was able to collect two of the swarms from around the Lansing area and give them a good home in his apiary. We wish them well. 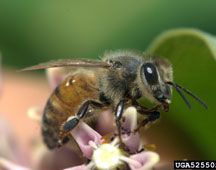 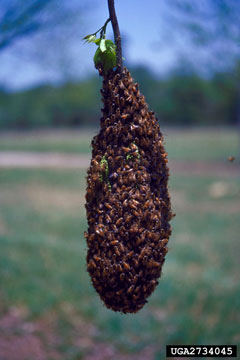 Finding happiness one bloom at a time

Why is my indoor plant unhappy?