Hornworm caterpillars: The big cats of the vineyard

Monitoring for these sphinx moth caterpillars can help save grape growers from some significant defoliation.

Michigan grape growers face a number of different insect pest challenges every year, but by far the biggest insects they encounter are the “hornworm” caterpillars of sphinx moths. There are three common grape-feeding species in the state with the Pandora sphinx, Eumorpha pandorus, and the Achemon sphinx, Eumorpha achemon, being the largest. A smaller species, the Virginia creeper sphinx (Darapsa myron, also known as the hog sphinx), is also often found feeding on grapevines.

The life histories of the Pandora and Achemon sphinx moths are very similar. Their caterpillars can reach over 5 inches in length when full grown. Their lifecycle starts out as a small, almost spherical green egg, usually laid singly on grape leaves by the adult moths in late June or July. Tiny caterpillars hatch about two weeks later.

At first, the caterpillars are bright green with a long, curled horn on their tail end. Slightly older caterpillars are usually bright green with a series of black-margined whitish or light yellow patches along their sides; they hold the front of their bodies up in a bent-back pose when threatened (Photo 1). There are a number of other color “morphs” in both species in which the base color of the caterpillar may be orange, rosy pink or even a deep brown. About mid-way through the caterpillar period, the horn is replaced by a slightly raised eye-spot marking (Photo 2). 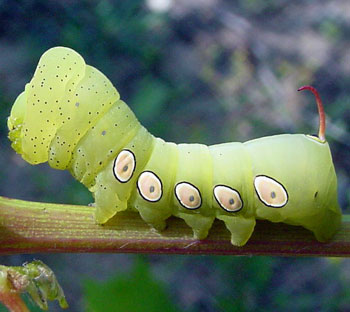 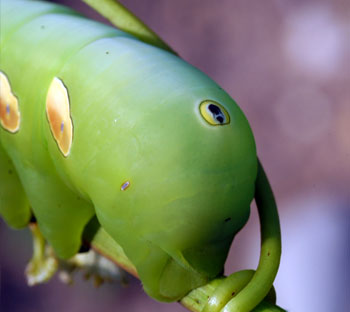 Younger caterpillars of the Pandora and Achemon sphinx are very hard to tell apart, but once they reach an inch in length it is usually possible. Pandora sphinx caterpillars typically have little shading or markings other than the eyespot and whitish patches, and the margins of the patches are not notched (Photo 3). The base color of the Achemon sphinx caterpillar, be it green, pink, brownish, etc., is delicately marked with small spots and patterns, and the margins of the whitish patches on their sides are notched (Photo 4). 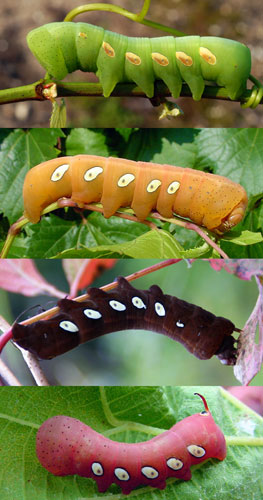 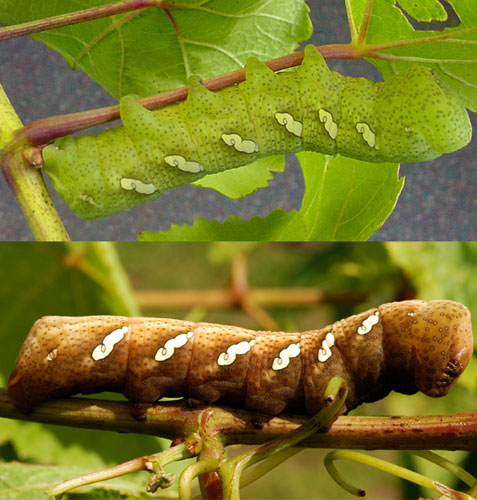 Full grown caterpillars are striking in appearance, and they are quite feisty – they will whip the front part of their body back and forth and regurgitate food to dissuade natural predators – and humans – from attacking them. The caterpillars feed only on the leaves of the grapevine, never injuring the shoots or fruit clusters. Larger caterpillars can eat several leaves a day, leaving tell-tale bare shoots on the vines. Large vines can tolerate this feeding injury without an impact on overall growth or fruit quality, but young vines may suffer greatly if a large portion of their foliage is consumed.

After growing to full size, the caterpillars tunnel into the soil and form pupation chambers several inches below ground; they may go more than a foot deep in sandy soils. They transform into a smooth, brown pupa (Photo 5) and remain in the soil chamber through the fall, winter and spring, emerging as adults in June or July. 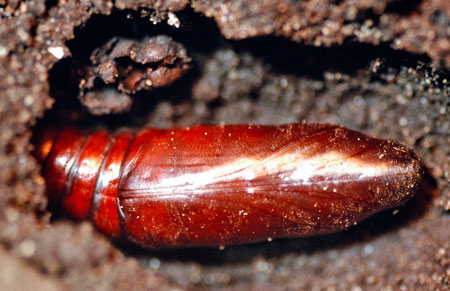 The adult moths of the Pandora sphinx are large – up to a 4-inch wingspan – and colored in shades of green with reddish or pink markings (Photo 6); the adults of the Achemon sphinx are beautiful shades of light and dark brown, marked with darker lines and patches with bright pink highlights on the hind wings (Photo 7). The adults are active only at night and may sometimes be seen taking nectar from deep-throated flowers, hovering like hummingbirds. They are attracted to bright lights and may be found resting near these in the morning. 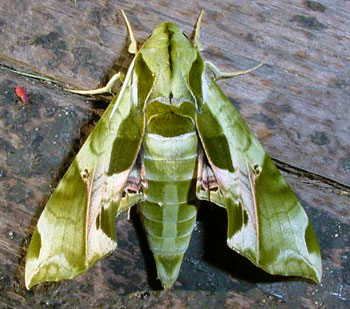 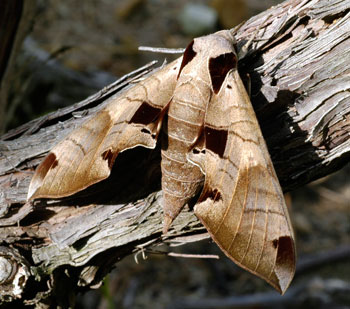 The Virginia creeper sphinx moth caterpillar is a more typical hornworm, bearing a distinct horn on the tail end throughout the caterpillar period. They are about 2 inches long when full-grown and their coloration is either greenish or brownish with lighter markings (Photo 8). The adults of the Virginia creeper sphinx have a wingspan of about 2 inches with forewings that are shades of olive green and dull orange hind wings (Photo 9). 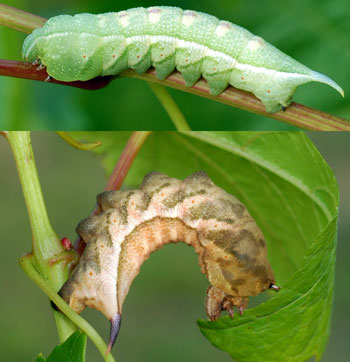 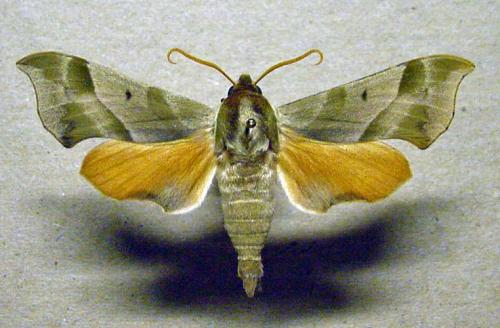 The Pandora sphinx is typically more common than the Achemon sphinx in Michigan vineyards, but population levels vary greatly from year to year and with location. The Virginia creeper sphinx is fairly common through much of the state. All three species are heavily parasitized by flies and wasps (Photo 10), keeping their numbers low enough that they are not usually pests of economic importance to established grape plantings. In newly planted vineyards, however, a single hornworm caterpillar can defoliate entire small vines, causing a great reduction in growth or death of the vine. 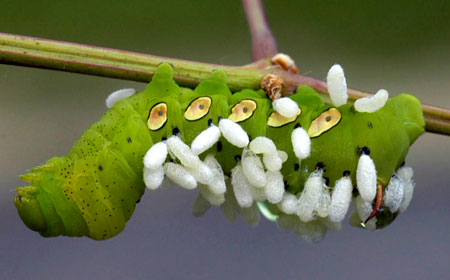 It is therefore prudent to maintain a regular monitoring program for young vineyards to be alert to the presence and activity of sphinx moth caterpillars. These are easy to control by hand-removal of individual caterpillars, or by use of one of the very effective and selective insecticides for moth control such as the bacterium B.t. (Dipel, Javelin) or the growth regulator insecticide methoxyfenozide (Intrepid). According to Michigan State University Extension, either of these will allow natural enemies to persist in the vineyard to aid in the suppression of the caterpillars.