Since July 4 air temperature has reach and exceeded 90oF in many regions. The hot weather is expected to last until Wednesday July 7. While hot weather is good for plant growth, temperatures above 90oF have been associated with losses caused by the black streak disorder in celery in 2005 and 2006. In both years, black streak occurred on celery plantings that were at their rapid growth phase (active growth) during the month of July. The 2005 and 2006 weather data indicated that during that time air temperature exceeded 90oF for a couple of days (see graph). Since 2006, air temperature has been cooler during the growing season. Field studies using cold frames (small greenhouses) to raise air temperature in the field in 2006 showed the potential to replicate the problem. Therefore, it is likely that high temperatures are implicated in the occurrence of celery black streak. Greenhouse and growth chamber studies suggested that temperature has rather an indirect effect by triggering other processes within the plant.

The high susceptibility of celery during its rapid growth phase strongly suggests that there is a greater demand for some nutrients and that the demand is probably not met when the crop is growing very activity under hot conditions. We have observed symptoms very close to black streak in sugar beets under boron deficiency. The typical symptoms of boron deficiency in celery are manifested in the form of crosswise cracks along the stem. However, development of brown areas and die back has also been reported.

Based on all the information reported above and preliminary tests, it is possible that black streak of celery is caused by a very mild boron deficiency that occurs when celery is growing rapidly under hot weather. This hypothesis is further supported by a few observations:

Our hypothesis linking a combination of three factors – rapid growth phase of celery, hot weather and mild boron deficiency – with black streak is being tested under both field and greenhouse conditions. The 2009 study was inconclusive due to crop destruction by flooding and a cool growing season. In the 2010 study, clear plastic is being used to raise temperature in some of the treatments (See photo).

Tips for avoiding losses in 2010

Based on 2005 and 2006 observations, the current hot weather will have more effect on the crop that was transplanted during the second half of May (and possibly first week of June also). That crop is currently at its rapid growth phase and the hot weather will likely exacerbate any nutrient deficiency. While we have not yet demonstrated a clear link between boron and black streak, we strongly suggest ensuring that adequate amount of boron (and other nutrients) is provided to the crop. This is particularly important for ‘Dutchess.’ Celery is one of the crops listed as responsive to boron application. This means that there is yield improvement within the range of rates that are nontoxic to celery. Consider a foliar application if necessary. With the current zero tolerance for black streak and the hot weather, it is important to take all actions necessary to improve crop management. This includes appropriate irrigation scheduling to avoid water stress. 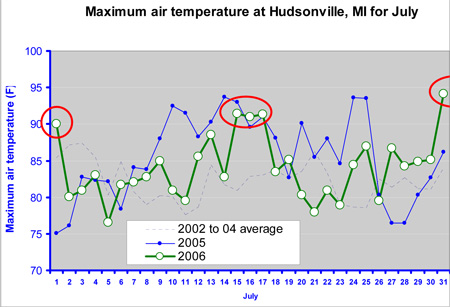 Dr. Ngouajio's work is funded in part by MSU's AgBioResearch.