Plants grown under daily light integrals less than 10 mol/m2d have fewer roots, less shoot growth, and can take up to twice as long to be ready for transplant.

For most floriculture crops, at least a moderate light intensity is necessary to produce a high-quality crop in a greenhouse. Greenhouses located in northern latitudes, such as those in Michigan, can receive very low ambient light conditions during the winter. As we enter that time of year, growers should measure light levels in their greenhouses, especially if they are propagating spring plant material.

The quality of many plants grown under a daily light integral (DLI; cumulative measure of light intensity during a 24-hour period) of less than 10 mol/m2d is significantly reduced. For example, Figure 1 shows the DLI in the Michigan State University research greenhouses without supplemental lighting during one winter. Growers should notice how often light levels dropped below the recommended 10 mol/m2d, particularly in late December, when the average DLI hovered around 2 to 4 mol/m2d. Those very low light levels were even recorded in a glass greenhouse, which often transmits more light than other glazing materials, such as two or three layers of plastic.

Figure 1. This graph shows the ambient daily light integral (DLI) in the MSU research greenhouses during November and December. Without supplemental lighting, light levels were often below the recommended target 10 mol/m2d (red line) that is necessary for adequate plant quality.

Under those very low light levels, how is plant quality affected? DLI affects root and shoot growth, branching, stem thickness, height and even flowering. For propagators growing plugs or liners, plants grown under higher DLIs typically have better rooting and are less elongated than those grown under lower DLIs. For example, salvia grown under 6 mol/m2d developed fewer roots and had more elongated stems than seedlings grown under 16 mol/m2d (Figure 2). In addition to increasing plant quality, growing young plants under higher DLIs can also decrease production time. Figure 3 shows New Guinea impatiens cuttings after 16 days in propagation grown under DLIs ranging from 1.3 to 10.8 mol/m2d. Plants grown under the highest DLI had increased root and shoot growth and were ready for transplant in less than half of the time as those grown under the lowest DLIs. 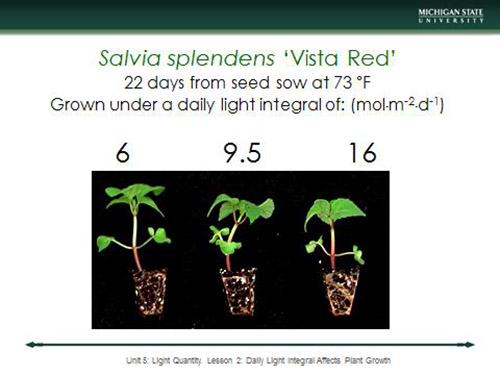 Figure 2. Salvia were grown under a daily light integral of 6 to 16 mol/m2d for 22 days. Plants were shorter and had better rooting under higher DLIs than lower DLIs. Photo credit: Lee Ann Moccaldi and Erik Runkle 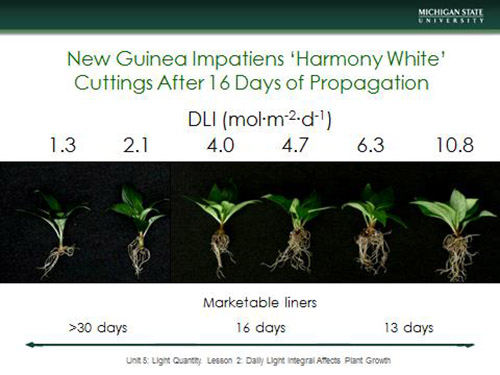 If you are beginning to propagate young plants in the next few weeks, maximize the amount of light available to plants and increase DLI, if possible. Try to keep your glazing material clean, change your old plastic, and if you have it, utilize high-intensity supplemental lighting.

For target DLIs for finished plants, check out:

Dr. Runkle’s work is funded in part by MSU’s AgBioResearch.