How to avoid a common blueberry planting error

Blueberries are often planted in the fall. Break up the root ball at planting so new roots grow out into the native soil.

I am often called to look at new blueberry plantings to determine what is wrong because of poor growth. Many times the field was planted before the soil was tested and the soil pH was too high for blueberries. Blueberries prefer a soil pH of 4.5 to 5.5.

Sometimes the soil pH is fine, but the plants stopped growing early or dried up during the first dry weather of the summer, even in fields that have irrigation. When this is the case, I can often walk up to the plant and easily pull it out of the soil. The plant’s roots never moved out of the peat soil that they grew in when they were raised in the nursery. This is especially true when the soil texture in the field is different than the potting medium the plant grew in before.

The peat mixtures used to grow blueberry plants hold water very well, but the sandy soils in many blueberry plantings do not. As the soil water drains away, there is little reason for the plant roots to grow into the relatively dry sand. This results in a small, restricted root system supporting a relatively large plant. This problem is not apparent early in the season when there are few leaves and the soils are moist. Later as the plant develops leaves, it starts to use more and more water until the day comes when the plant sucks all the water out of the little pocket of peat soil where its roots are.

I see this problem usually in sandy soils, but I also see it in heavier soils. I often see it in young plants where they just are not growing. They get off to a good start in the spring and then just stop and sit there for the rest of the year because the small root system just cannot supply enough water to the leaves to allow the shoots to grow for very long in the spring before they run out of water and stop. These plants just sit there year after year. They grow a little bit every spring and then shut down and hang on for the rest of the growing season. Often, people think the plant needs more fertilizer and sometimes fertilize them to death by giving them more and more fertilizer to get them to grow. The solution is to dig up these stunted, root-bound plants in the spring or fall and replant them. Be sure to break up the root ball and replant them. 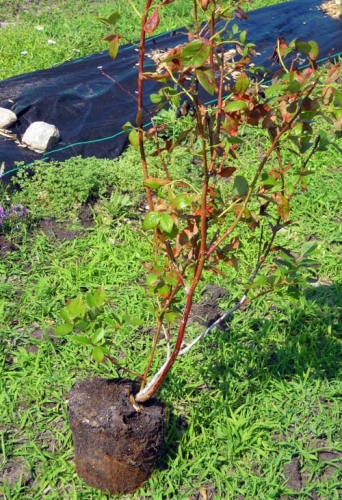 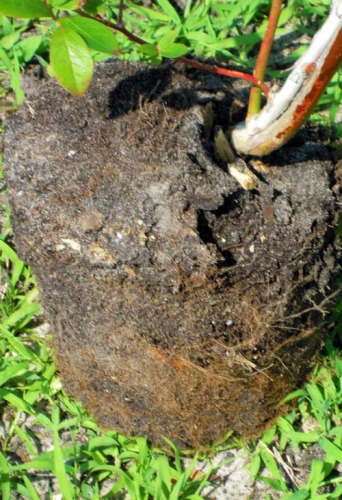 This 3-year-old plant looked good in the field after planting. It was planted in a trench that was soil
and peat. During the hot summer, the leaves dried out and it came out of the ground easily. This bush thrived after the root ball was ripped open and replaced.

Don’t sacrifice a year or more of growth by being in a hurry at planting time. Be sure to thoroughly break up the root ball when you plant the plant. When you pop it out of the pot, don’t just cut the edges or shake a little dirt off; pull it apart. Pull the bottom of the root ball apart so the root system is twice as wide and half as deep as it was and spread the root system out in the hole. Let the loose peat fall into the planting hole. Almost all the roots are around the outside of the soil mass where the aeration in the pot was best and this is where all the new roots will come from.

If there is a real difference in soil texture between the potting medium and the native soil, add some peat. This is especially true if the soil is mostly sand or clay. Compost or composted manures are not usually good to add to the planting hole since these materials have a higher, more neutral pH. These materials will raise the soil pH higher than blueberries like in the soil.

When you plant blueberries, your objective is to grow a big productive bush in eight to 12 years, and that bush requires a big root system. Make every effort to get the roots off to a good start so they can support vigorous growth for years to come. If the root system is restricted, that plant will always be small.

Agricultural Weather Forecast for May 24, 2022