Hot summer days in July and August mark the time of year that waterways, wetlands and ditches come alive with a blanket of purple.  Unknowing tourists and photographers capture exquisite sunset photos of this seemingly harmless and attractive plant while it graces the landscape with its sinister grip.

Purple loosestrife (Lythrum salicaria) is a Eurasian perennial that inhabits river banks, wetlands and disturbed ditch sites throughout North America.  Due to its aggressive growth in the delicate wetland ecosystem this exotic weed has been viewed as a serious pest by natural resource managers across the continent.

Like many alien invaders, the plant came to North America in the early 1800’s, most likely in the ballast of ships.  Loosestrife seeds embedded in tidal sediment that was used to stabilize the vessels ended up in water ways along United States coastal ports.  Seeds easily moved through canals and ditches but were also widely distributed by zealous gardeners who prized the beautiful purple blooms.

Botanists and natural resource managers have long suspected that the negative effect of this aggressive wetland plant would impact birds, fish, reptiles, plant biodiversity and essentially the whole way the wetland ecosystem functions.  Each organism in an ecosystem survives in relationship to other organisms.  When the balance is upset, science has often documented long lasting negative impacts. While the loosestrife problem has, at times been a topic of debate among scientists, most would agree that purple loosestrife has widely displaced much of the native plant habitat in the West Michigan area.

Michigan State University entomologist Doug Landis has been a part of an effort to keep loosestrife at bay by employing the plant’s own natural enemies since 1994.  An expert in the use of bio-controls, Landis began working with the Michigan Department of Natural Resources to release Galerucella beetles by the thousands in the Saginaw area.  This tiny beetle feeds on the leaves of the plant, weakening it thus reducing flowering and seed production.  Mature plants may not die, but become unthrifty and are much less competitive.  Landis sites that this area once was covered with heavy infestations of purple loosestrife but with the feeding done by the beetles released, today it is hard to find a flowering purple loosestrife plant.  Similar results have occurred across Michigan where release projects have seen anywhere from a five percent decrease to a fifty percent decrease.

Use of biological controls is certainly not an absolute science.  Some of the risks include ending up with a non-native insect pest that feeds on native plant material.  Through quarantined research, if studies show that biological controls are “host-specific” they can then be implemented.

It is a slow transition to rid a heavily infested wetland of loosestrife.  Most likely, the plant is here to stay.   Landis also points out that since this long-term study in Saginaw began he has documented many varieties of native vegetation now coming back.

With the success of this project, many others like it have been employed across the state.  Students, teachers and naturalists can take credit for releasing the six-legged munchers in hundreds of sites across Michigan.  A website has been created to help people learn more about how they can get involved.  The website is: www.miseagrant.umich.edu/pp/ and it includes student activities and worksheets, before and after photos of ongoing research and many other links.   By participating in the Purple Loosestrife Project developed by Michigan Sea Grant, hundreds of students have learned about Michigan’s bountiful wetland resources and ways to protect them.

Rebecca Finneran is a Michigan State University Extension Horticulture Educator, garden writer and lecturer.  You can contact the Kent County MSU Extension office at 336-3265 for program information or log on to http://myfavoritegardenshops.com/blog/ for classes, conferences and program information. 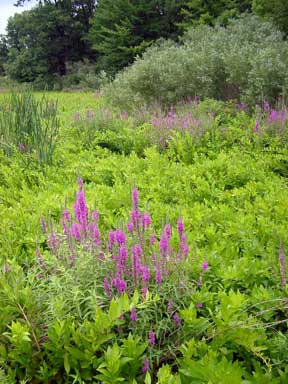