On Wednesday, April 14, the Eyjafjallajökull volcano in southern Iceland erupted. (See http://www.huffingtonpost.com/2010/04/20/the ultimate iceland volc_n_545010.html for correct pronunciation and some interesting attempts by the media.) This sent a plume of volcanic ash south and eastward towards mainland Europe. Iceland has about 130 volcanic mountains, 18 of which have erupted at some point since its settlement around 900 AD. The high concentration of volcanoes on the island (and the existence of the island itself) is the result of its position on the Mid Atlantic Ridge marking the boundary between the Eurasian and North American tectonic plates.

The ash cloud from the volcano, consisting largely of fine particles of pulverized rock, moved south and east from the volcano towards mainland Europe following winds in the middle troposphere, roughly 20,000-35,000 feet above sea level, as seen in Figure 1 from satellite imagery. The eruption led to travel chaos across Europe from April 15 through April 21 due to the cancellation of thousands of flights. More than one million passengers were impacted. Ingestion of volcanic ash by jet engines can result in engine damage or failure as well as obstruction of view through the cockpit windscreen due to etching by the acidic aerosols. Economic impacts thus far have been estimated at more than $3 billion due to the cancelled flights alone. When related trade losses resulting from the unavailability of air travel are factored in, the figure will be much higher. 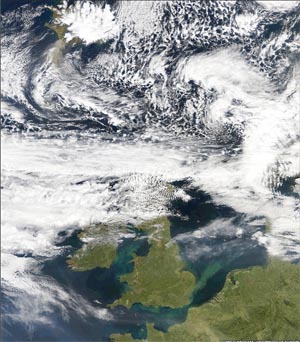 In addition to the travel woes, there are also ecological impacts. The ash released during the eruption and deposited on the landscape below the ash cloud, sometimes accumulating several inches in depth, contained a large fraction of fluoride, which in high doses may harm the bone structure of cattle, horses, sheep and humans.

Overall impacts from the eruption were enhanced due to a persistent upper air jet stream pattern across northwestern Europe that resulted in the ash cloud flowing over the same region continuously for almost one week. One week after the original eruption, the ash cloud covered large areas of Europe and stretched from as far west as the Canadian Maritime Provinces in North America to eastern Asia (Figure 2). Again, this was in direct response to upper level winds at the time. Note in the upper left panel (for 12:00 UTC on the 20th of April) the remnants of the original ash cloud (in dashed green outline) from northern Scandinavia through far eastern sections of Russia. Six hours later at 18:00 on April 20 (upper right panel), the original cloud is gone, while the secondary cloud continues to grow and disperse. 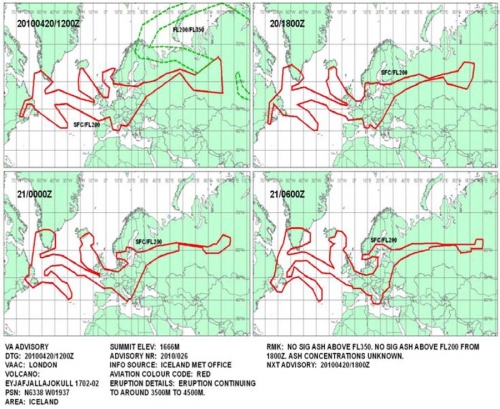 Even though the strength and impacts of the continuing eruption have decreased in recent days, one obvious concern is whether the eruption might lead to changes in weather or climate here or elsewhere. Volcanic eruptions in the past have led to significant changes in weather worldwide. The eruptions sometimes release large quantities of particulate aerosols and sulfur into the atmosphere that subsequently oxidize and combine with water vapor to form tiny droplets of sulfuric acid, that are highly reflective. If the eruption and ash cloud are large enough, several percent of the incoming solar radiation that drives the earth=s weather/climate system may be reflected back out to space, potentially cooling the earth's surface.

In Iceland itself, the eruption of the Laki volcano in 1783 led to the release of an estimated 120 million tons of sulfur dioxide, which in turn led to a range of unusual weather around the world including extremely cold conditions in Europe and eastern North America the following winter. It also weakened monsoon circulations, resulting in crop failures and famine in Africa and India in 1784. Similarly, the 1815 eruption of Mount Tambora in Indonesia led to the infamous “Year without a summer” in 1816 across many sections of the Northern Hemisphere. In eastern North America, unusually cool weather persisted for at least three months and ruined most agricultural crops.

More recently, the eruption of Mount Pinatubo in the Phillippines in 1991 led to a global temperature decrease of about 0.7° F, and to a record or near record cool summer and associated agricultural problems here in Michigan during 1992. I personally remember a destructive hard freeze that season on Memorial Day weekend, sleet falling during June in central portions of the state, and repeated morning lows in the 30's in July and August.

So what makes a volcanic eruption a potential climate changer? The keys are the violence or power of the eruption itself, the amount of volcanic ash released, and the height to which the ash is ejected into the atmosphere. If the ash remains in the troposphere (the lowest major layer of the atmosphere up to about 50,000 feet where almost all of our weather occurs), the ash tends to fallout by gravity or is “scavenged” out by precipitation relatively quickly, on the order of days or weeks. On the other hand, if the eruption is strong enough to eject ash into the second layer, the stratosphere, then it may remain for much longer periods – weeks, months or even years. Fortunately, only the largest, most powerful eruptions have a chance of altering weather and climate on a global scale and they are very few in number. For the eruption of Eyjafjallajökull thus far, the ash cloud has generally remained below 35,000 feet, well below the stratosphere, so large scale weather and climate impacts are not expected. One notable exception might be portions of southern Iceland near the volcano.

Finally, it is interesting to note that the last three times Eyjafjallajökull has erupted, so has another nearby larger volcano, Katla. Known to Icelanders as one of the two “Angry Sister” volcanoes (the other is Hekla) for its long history of violence and unpredictability, Katla is being watched carefully by scientists for any activity. Thankfully, no signs of this so far. Even so, Eyjafjallajökull is known for lengthy eruptions. When it was last active in 1821, the eruption persisted almost 14 months. Thus, this saga may not be over just yet....