Identifying sunscald in your chestnut orchard

As chestnut trees around Michigan begin to break dormancy, growers should keep an eye out for winter injury caused by sunscald.

Sunscald, also known as southwest disease, occurs when extreme changes in temperature take place during the winter months when chestnut trees are dormant. Sun reflecting off the snow during the day warms the bark on the south side of the tree. When night falls and temperatures plummet, the previously warmed area of the tree is damaged due to a loss of cold hardiness. Weak, secondary pathogens can then enter the damaged tissue and cause infection. Affected tree may suffer chronic infections and poor growth following injury. Young trees with thinner bark are particularly susceptible. The resulting cankers that erupt due to bark death can look similar to chestnut blight.

Michigan State University Extension strongly advises growers to know how to prevent sunscald and how to tell it apart from a chestnut blight infection. Again, sunscald cankers commonly appear on trunk tissue located on the south side of the tree. The affected tissue may appear discolored, cracked or sunken. Canopy failure or branch death often become visible as leaf expansion begins in the spring and may not appear until as late as the end of rapid leaf expansion in summer. Symptoms are observed during the season immediately following the winter during which damage occurred. Sunscald damage to the trunk primarily occurs just above the snow line and is more prevalent following winters with increased clear skies and sunshine.

Chestnut blight infections can also occur on the trunk of the tree and are often confused with sunscald damage. Blight infections are most frequently found in close proximity to the graft or mechanical damage or wounding. Typically trees infected with chestnut blight will exhibit more than one canker on the trunk and scaffold branches. On the smooth bark of young trees, the canker can appear bright brown or orange and give the surface a rough or fissured appearance. On mature trees, the damage is less obvious, but orange bumps, roughly the size of the head of a pin, are visible on older cankers. 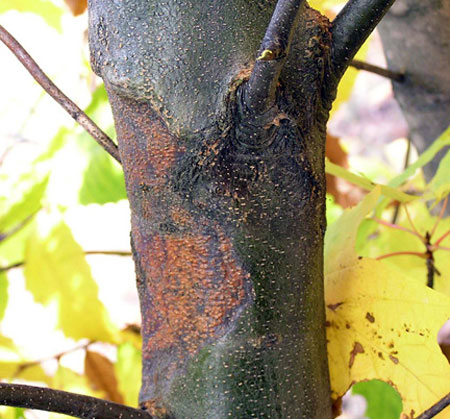 Prevention of sunscald involves painting the trunks of trees with white latex paint. White paint reflects the light that otherwise would be absorbed by the dark trunk, effectively cooling the surface temperature. As the trunk grows or the paint peels away, growers should reapply the paint as needed. White tree wraps are also effective at preventing sunscald on smaller trees. 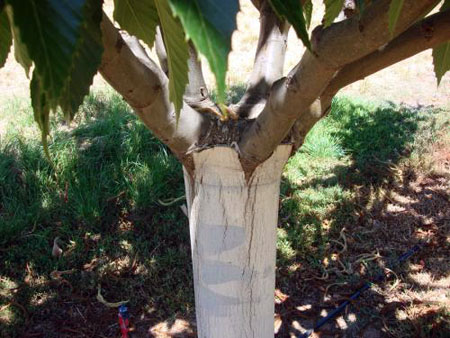