Tamarack (Larix larcinia), also known as American larch, is a “deciduous” conifer, meaning it loses its needles each year in the fall. Tamarack needles are turning brown in many areas in Michigan. The culprit causing the browning is a tiny caterpillar called the larch casebearer (Coleophora laricella). The larch casebearer can be a serious defoliator of tamarack of all ages. It was introduced from Europe and was first recorded in Massachusetts in 1886. It now occurs throughout most of the range of tamarack/larch in North America.

The larch casebearer gets its name because it constructs a protective case from mined-out needles that tiny larvae line with silk. As the larva grows, the case is enlarged and provides camouflage, making the larva very difficult to see. The casebearer overwinters within the case attached to a branch most often near the base of a bud. They begin to feed in May as soon as new needles start to grow. The larva fastens itself to a needle and mines the interior as far as it can reach without leaving the case. The damage from this feeding makes needles appear bleached or straw-colored.

Larvae should be finished feeding soon and will pupate inside the needle case. Silvery gray moths will emerge in late June or early July, depositing eggs in needles. When the eggs hatch, the tiny larva will feed within the needle for a couple of months before overwintering. The most evident damage occurs in spring. Generally, although trees turn completely brown, they will reflush by mid-summer and recover. 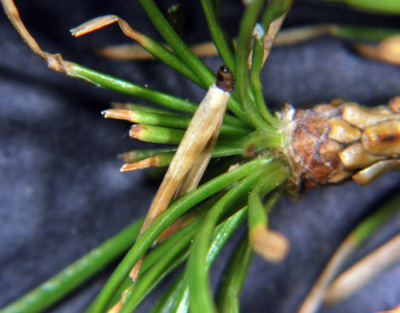 The good news is that a number of native as well as imported predators and parasites combat the casebearer. For homeowners with severe casebearer issues on their tamarack trees, there are two times to control these insects. The first is in spring when they begin feeding on new growth. Right now it is probably too late to be effective since much of the damage has been done and they are close to completing the feeding stage. The second time is in late August through mid-September to control the overwintering larvae. However, control measures are rarely needed to protect the health of the tree.

Two other pests Michigan State University Extension experts are finding are spittlebugs (Aphrophora parallela) and woolly larch adelgid (Adelges laricis). Spittlebugs feed on tree sap and produce a frothy, white spittle mass on shoots. Woolly larch adelgid feed on larch needles. With both of these pests, damage is minimal and doesn’t require any treatment unless the tree appears to be coated with snow. 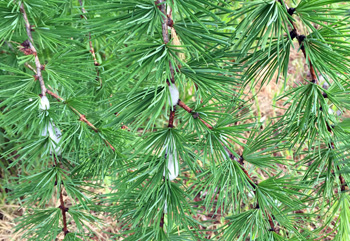 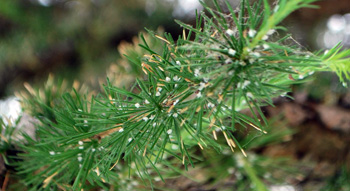