Corn research at the Mason Technology Center in 2018 focused on nitrogen fertilizer rates, end-of-season stalk nitrate-nitrogen (N) and drone imaging. The trial was planted on May 29, 2018, in Mason, Michigan. Treatments were eight-row plots 185 feet long and replicated four times. Nitrogen was sidedressed on June 26 using 28 percent knifed in between rows. We tested four rates of nitrogen: 0, 60, 120 and 180 pounds per acre. End-of-season stalk tests were conducted at the Michigan State University Soil and Plant Nutrient Laboratory.

Despite the drought in June and July and soil variability within the trial, corn showed a significant yield response to nitrogen fertilizer rates (Table 1 and Figures 1-2). If nitrogen is $0.41 a pound, then 60, 120, and 180 pounds of fertilizer nitrogen would cost $24.60, $49.20 and $73.80 per acre, respectively. The last increment from 120 to 180 pounds nitrogen increased yield by 13 bushels. This nitrogen rate increase was still economically justifiable at $3.30 a bushel. 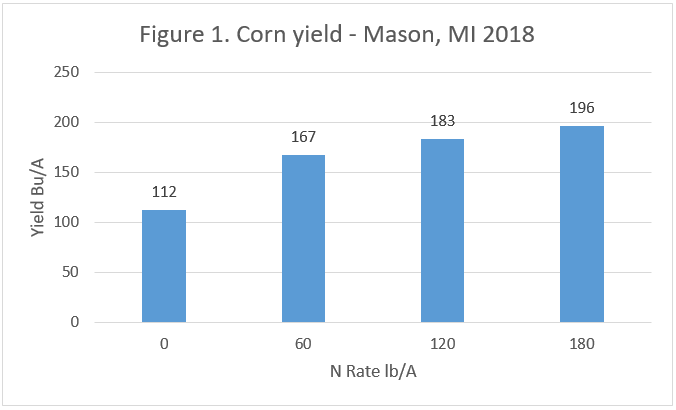 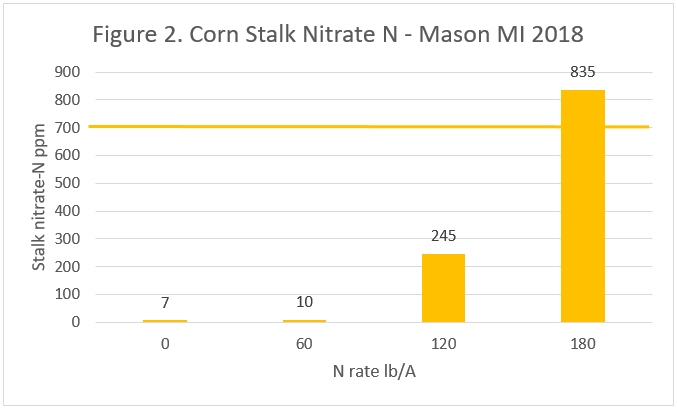 The accepted optimum range for the end-of-season stalk nitrate-nitrogen is 700-2,000 parts per million (ppm). The stalk nitrate-nitrogen levels increased as nitrogen rate increased and the optimum level was achieved at the 180 pounds per acre nitrogen rate. The yield data clearly supports the validity of using this optimum range in Michigan. The optimal range indicates nitrogen availability within the range needed to maximize profits. The stalk nitrate-nitrogen data show economical yield losses would have resulted at nitrogen rates of 120 pounds per acre or less. The higher end of this range is more appropriate when nitrogen fertilizer is relatively cheap and grain prices are relatively high. The lower end of the range is most appropriate when nitrogen fertilizer is relatively expensive and grain prices are relatively low.

This trial would have benefitted from having a higher rate such as 240 pounds per acre, as both the corn yield and stalk nitrate-nitrogen were still increasing.

Drone images were taken in July and August at V7 and V10. These growth stages were chosen because in practice it is possible to take remedial or rescue applications of nitrogen up to this stage of corn. The NDVI image taken at V10 is shown in Figure 3. The darker green strips in the image represents the higher nitrogen rates. An effort is underway to use state-of-the-art software technology to decipher and differentiate nitrogen rates based on canopy reflectance.

In the Weeds podcast on upgrading your cropping system