Inspecting soybean roots for soybean cyst nematodes is a quick and simple way to improve your SCN prevention or management plan.

Soybean cyst nematodes (SCN) cause annual yield losses of more than 128 million bushels per year in the United States, making it by far the most damaging pest of soybeans. Soybean cyst nematode is also a major reason why soybean yields are not increasing as fast as corn yields.

The first step to SCN management is to identify infested fields. Above ground symptoms such as yellowing and stunting are visible in elliptical areas when SCN populations are high and environmental conditions cause the plants to be stressed. However, yield losses as high as 20 percent can occur in infested fields that don’t exhibit above ground symptoms. Because of this, producers are urged to carefully dig up soybean plants in every field (including fields planted with SCN resistant varieties) and visually inspect them for the enlarged bodies of SCN females. This can be done anytime from six weeks after planting until three to four weeks prior to harvest. However, sampling earlier is better as the plants are easy to dig and the females are easier to see on smaller root systems.

The SCN females are very small, white- to cream-colored and shaped like a lemon. Please refer to Photo 1. When the females die, their bodies form a protective cyst encapsulating the eggs. 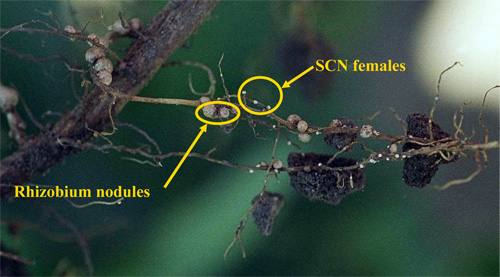 Producers can increase their probability of detecting SCN by checking potential problem areas such as entry points to fields, areas having pH levels above 7.0, coarse-textured areas, low spots and flooded areas. Producers should also check areas in their fields that have consistently yielded poorly or have stunted and yellow plants in this year’s soybean crop.

After all of your fields have been inspected, you can use your observations to begin making some SCN management decisions. If some or all of your fields are clean, your highest priority should be to keep the clean fields from becoming infested in the future. Since nematodes are easily transported from field to field by tractors and equipment, this is not an easy task. The easiest method, but not the most practical, is to perform all field operations on your clean fields before moving to infested fields. Another more labor intensive method is to thoroughly wash all soil off from equipment before entering clean fields.

The next highest priority is to collect soil samples from the infested fields and send them to MSU Diagnostics Services. The test results will provide an SCN severity rating and recommendations for managing SCN in each infested field. The Michigan Soybean Checkoff program will cover the laboratory fees for up to 20 soil samples per farm. Please see the SOYBEAN FACTS factsheet, Sampling for Soybean Cyst Nematodes, for more information about collecting and submitting SCN soil samples. The fact sheet is available online at www.michigansoybean.org.