Integrated management of asparagus following the end of the harvest period

After harvest, a vigorous and healthy fern is necessary for carbohydrate recharge in the crown and optimum yield next year.

Asparagus is an interesting vegetable crop because of its perennial nature, physiology and growth cycle. Management practices in any given year have significant impacts on spear production and yield the following year. As the 2011 harvest period winds down, this is the time to adopt management strategies that will optimize yield in 2012 by utilizing your understanding of the asparagus growth cycle. 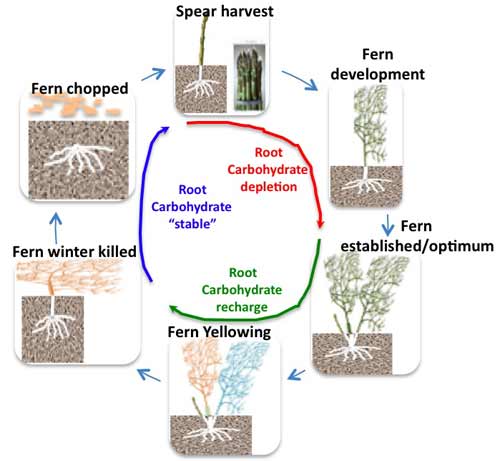 Following the end of the harvest period, asparagus spears are allowed to develop into fern. During the initial phase of fern development, there is further decline in the carbohydrate content of the crown. However, once the fern has reached maturity and photosynthesis is fully operational, the crown is recharged rapidly with carbohydrates. The tiny “leaves” called cladophylls on the fern are responsible for most of the photosynthesis in asparagus. The amount of sugar produced during photosynthesis depends on light and temperature, and varies among cultivars. However, there are several management practices that can easily be manipulated by growers to improve photosynthesis and the amount of carbohydrates stored in the crown. These factors include

The total photosynthetic area of the crop depends on both the number of shoots and the size of individual shoots. Once the first spears are allowed to develop into fern, there is a feedback inhibition to the crown that prevents subsequent spear formation. Therefore, it is important to prevent shoot death or poor growth during the fern development phase of the growth cycle.

In conclusion, a vigorous and healthy fern is critical for adequate carbohydrate content in the crown at the time when the crop goes dormant. The carbohydrate content of the crown is the driving factor for yield the following year. To optimize yield, growers should adopt management practices that promote vigorous and healthy ferns. Any abiotic stress, such as drought and low fertility, or biotic stress, such as weeds, pests, and diseases, during fern development can compromise next year’s yield.

Dr. Ngouajio’s work is funded in part by MSU’s AgBioResearch.

Who is eating the produce that I grow?

Dealing with water for irrigating

Livestock may not mix with fruit and vegetable production