A 2011 survey indicates some progress has been made to reduce injury to blueberries, but more improvements are needed.

In the past, blueberry growers suffered significant financial losses due to damaged blueberry bushes near roadways. In 2003, crop losses and plant mortality were estimated at $682,000. Blueberry fields located alongside main highways in Ottawa and Allegan counties are exposed each winter to road salt (sodium chloride) spray that is created by passing vehicles. Growers began voicing concerns about damage to bushes close to roads in 1999. In response, a team from MSU Extension and AgBioResearch demonstrated that the cause of the injury was salt exposure, which reduced the cold hardiness of flower buds and twigs, leading to damage during the winter.

The amount of dieback and winter injury increases as more salt is applied to the roads. Other plants along salted roadways are affected by wind-blown salt, but blueberries are particularly sensitive. Deicing salt is an important tool in maintaining safe road surfaces in snowy regions such as Michigan. According to William Wegner and Marc Yaggi, 8 million to 12 million tons of sodium chloride (NaCl) are applied to U.S. roads each year. The highest rates are applied in Massachusetts (19.94 tons/lane-mi./year) and New York (16.6 tons/lane-mi./year). For more of their findings, read their article Environmental Impacts of Road Salt and Alternatives in the New York City Watershed.

Michigan, on the other hand, has seen an increase in the use of deicing salt in counties with heavy traffic volumes. According to the Ottawa County Road Salt Commission, appointed in 2004 by the Ottawa County Planning Commission to address the environmental impacts of road salt, the Ottawa County Road Commission (OCRC) applied 30.7 tons/lane-mi. on 124.96 miles of county roads in 2003. This high use of deicing salt has caused extensive damage to blueberry fields. A survey conducted in 2004 by MSU Extension indicated that blueberry growers lost an estimated in $682,000 in 2003 due to lost production and bush mortality.

After three years of the IRSPM implementation, OCRC Managing Director Kent Rubley indicated that the Road Commission had reduced the amount of salt used per storm event by 20 to 25 percent. In sensitive areas (Photo 1) near blueberry fields the program used BOOST™, a blend of calcium chloride and de-sugared molasses to protect blueberry fields. Everywhere else straight calcium chloride was used. 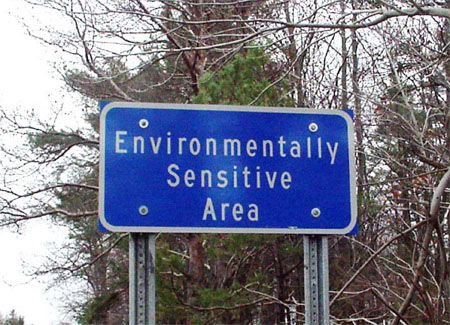 On March 4, 2009, Mike TerHorst from the OCRC indicated during a webinar for a national gathering of road maintenance personnel from 191 locations in 19 states that by 2008 the OCRC had reduced the amount of salt used in the county by as much as 30 percent as a result of the implementation of the IRSMP.

Our preliminary evaluation in November 2005 indicated that even before any salt was applied, sodium and chloride concentrations in water samples taken from the blueberry root zone in fields located in front of US-31 were already 20 times higher than those from a control field adjacent to a non-salted secondary road. In April 2006, one year after the IRSPM implementation, sodium chloride concentrations were four-times lower than those of November 2005. There was also a decrease in bud mortality at secondary roads but not at blueberry fields located alongside US-31 and M-45.

Based on flower bud mortality in roadside fields measured in 2006 and 2011, the implementation of the IRSMP has been successful in reducing damage in blueberry fields located near secondary roads. Flower bud mortality decreased from an average 16 percent to less than 11 percent which is not different than the “normal” winter damage in fields facing non-salted roads. However, the IRSMP has not reduced damage to blueberries along major roadways (US-31, M-45,120th Avenue), where flower bud mortality and dieback ranged from 90 to 100 percent, the same as observed before implementation of the program.

Additional measures or changes in the IRSMP will be needed to reduce blueberry damage in fields alongside US-31, M-45 and 120th Avenue to acceptable levels. This may include planting of blue spruce and other salt tolerant species along roads to act as wind screens. Tree barriers reduced wind speed and deflect salt spray created by passing by vehicles. In the meantime, MSU Extension will continue to monitor the effect of the IRSMP and provide the Ottawa County Planning Commission and the OCRC with technical information to make adjustments to the salt management program. Growers will be also informed on the results of our evaluation.

Dr. Hanson’s research is funded in part by MSU’s AgBioResearch.