Measure soil moisture and irrigation equipment output to ensure timely application of the right amount of water uniformly across your field.

Irrigation of crop fields is a common practice in areas of the country that receive little rainfall or have soils with little water-holding capacity. A few regions in Michigan that have light-textured soils have seen a significant increase in irrigated acres in the last 50 years, including counties in the south central and southwest part of the state. Farmers have used different approaches in deciding when to irrigate, including assessing the look of the crop, checking soil wetness to shovel depth and, more recently, more sophisticated methods like irrigation schedulers that are based on evapotranspiration rate estimates (see “Irrigation Scheduling Tools” by Michigan State University Extension and Purdue University Extension). While these approaches can be used successfully, a more direct method for measuring how much soil moisture is available to the crop involves the use of soil moisture monitors.

Wally Hekter, a second-generation farmer with Legacy Land Farms, Inc. in Michigan’s St. Joseph County, has been experimenting with soil moisture monitors for the past three years and has seen the benefits of utilizing this technology. Although he admits using irrigation schedulers and observations of the crop and the soil surface are useful, he says the first major benefit of using moisture sensors is knowing exactly how much water he has available for the crop at any given time – what he calls “balancing the checkbook.”

“It is good to measure what is going in (irrigation and rainfall) and what is going out (evapotranspiration estimates), but it is important to balance the checkbook to make sure you have in the ‘bank’ what you think you have,” says Hekter.

The second major benefit is the peace of mind he has, knowing that he does not need to guess whether he should irrigate on any given day because he can make the decision based on actual scientific soil measurements.

Hekter has a set of sensors in each of his fields, one each at 1-, 2- and 3-foot depths. The figure below is a season-long graph of soil moisture as measured with these sensors. The gray line at 50 centibars (cbar) was considered the wilting point for the crop in a sandy loam soil, while 0 cbar represents the maximum water-holding capacity for this field. The goal is to irrigate enough to keep soil moisture below 50 cbar, but not so much that water (and nutrients) is lost through leaching. We can see that the top 1 foot dried out the fastest early in the season and reached 50 cbar a few times in July. The soil at 2 and 3 feet began to dry out beginning in July and August, respectively, showing that the crop roots had grown downward and were extracting water from those depths. 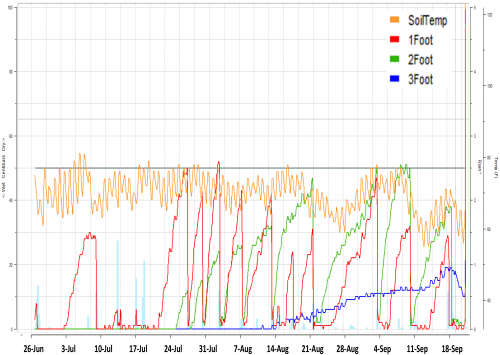 Plot of soil moisture (centibars, left axis) in a seed corn field throughout a season. Moisture was monitored at depths of 1 (red), 2 (green) and 3 feet (blue). Rain or irrigation events (inches, light blue) and temperature (degrees Fahrenheit, orange) axes are on the right. The gray line at 50 cbar was considered the wilting point for the crop in sandy loam soil.

Using this technology, Hekter knows not only what the water-holding capacity of his field is – and therefore how much needs to be applied each time – but also when to water to avoid stress to the crop. He said the equipment for each field pays for itself if he can avoid watering two times that he would have previously.

Another important aspect of irrigation is ensuring application is uniform across the field (see “Evaluating Irrigation System Uniformity” by MSU Extension and Purdue Extension). This is critical not only for plant water needs, but also when applying fertilizer or crop protection products. Tony Belcher, a sales and service representative for Koviack Irrigation and Farm Services in Three Rivers, Michigan, has worked on all aspects of irrigation from service, sales, installation and design in residential and agricultural settings. He stresses with his clients that it is critical to know the actual flow rate at the pivot at different pump speeds, the actual travel speed of the rig through the field and the water output all along the irrigation boom and with the end gun. He has seen cases where a farmer thought he was applying a given amount of water, but the actual application varied from 30–40 percent more (typically near the pivot) or less than that amount. He recommends measuring the actual output at multiple points along each span every five to six years to make sure nozzles were selected correctly and as a check to see whether equipment is wearing uniformly.

For more information about irrigation management, visit the MSU Extension Irrigation website or contact Lyndon Kelley at kelleyl@anr.msu.edu or 269-467-5511.

The St. Joseph County Integrated Pest Management (IPM) Breakfast Series is organized by the MSU Extension field crops team in southwest Michigan. The meetings run through the end of June and are held on Tuesdays at the Royal Café in Centreville, Michigan, beginning at 7 a.m. Each meeting includes an update of the major field crops grown in the region, including a crop and pest report, followed by a presentation from a guest speaker on a topic important to crop production. Participants can order breakfast and eat during the meeting.

The speaker for the final meeting on June 28, 2016, will be Jamie Scott with Scott's Cover Crops who will be addressing the topic “Interseeding Cover Crops.” The meeting will be sponsored by Ralph Lutes with Lutes Flying Service Inc. and the Monsanto Company. Meetings are open to the public, and CEU and RUP credits will be available.

For more information on this breakfast meeting series, contact Eric Anderson at the MSU Extension St. Joseph County office at 269-467-5511.