Biological control is not typically considered to be an important alternative to chemical control of insect pests in blueberries. Although a number of blueberry growers are already practicing some form of organic production, most new pest control tools utilized are organic approved or reduced-risk insecticides. One reason for the apparent lack of interest in biological control for blueberry insect pest management may be the limited information on the impact of biological control agents on insect pest populations.

In Michigan, evaluations of the natural biological control on blueberry insects pest has been a long process starting in the 90’s by Doug Murray, MSU Department of Entomology. He demonstrated the importance of natural biological control agents on suppressing fruitworms in Michigan’s blueberry fields. Other studies conducted in West Michigan crops fields and orchards indicated the presence of abundant populations of parasitic wasps attacking eggs and larvae of several species of leafrollers (Wilkinson et al. 2002, MSU Department of Entomology). Lately, Rufus Isaacs and the small fruit team studied in depth the species composition of the biological control complex in West Michigan blueberries. These studies are the basis to start developing biological control strategies for controlling some of the most important pest of blueberries in our fields.

For example, in West Central Michigan the best known egg parasitoids of cranberry and cherry fruitworm eggs are Trichogramma minutum wasps and some braconids such as Pahanerotoma franklin (Figure 1). Egg parasitism by these parasitic wasps in unsprayed fields ranges from 10 to 17 percent, and approximately seven to eight percent in fields under reduced-risk insecticides. 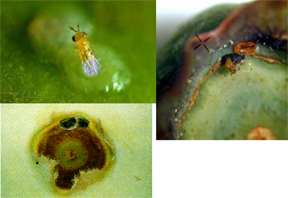 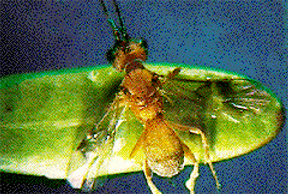 Another important group of parasitoid wasps in the natural biological control complex are the Aphidius species which attack aphids and provides natural control for the blueberry aphid (Figure 2). Aphidius are small wasps that lay eggs singly in aphid nymphs. The wasp larvae consume the aphids from inside. As larvae mature they the kill the aphid; the aphids turn into mummies. After the larvae pupate, each adult wasp emerges through an exit hole cut in the mummy. In Michigan, aphids are active right after bloom and peak in mid-July. The parasitism appears one or two weeks after the nymphs emerge from their overwintering eggs. The maximum population of parasitic wasps occurs in mid-July. 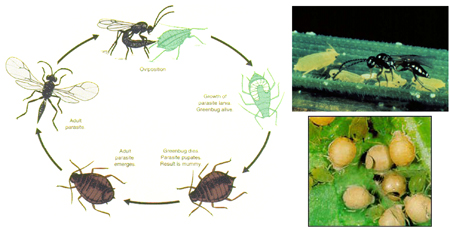 Since most leafroller species are native species, there are a number of parasitic insects that attack their eggs or larval stages. These include parasitic wasps like Bassus dimidiator, Colpoclypeus florus and Tachinid flies. Selecting insecticides that have lower toxicity to these parasitoids (like IGRs such as Intrepid of Confirm, and B.t.s) will enhance the effectiveness of biological control. In West Michigan leafroller larvae parasitism ranges from 7.6 to 10.7 percent during the first larval generation to 26 to 29 percent during the second generation (Wilkinson et al. 2002, MSU Department of Entomology).

The above examples show the potential for the use of biological control agents in blueberry pest control.

For those growers interested in experimenting with biological control or adding this tool to their pest control tool box, here there are some suggestions:

For cherry and cranberry fruitworm control, Trichogramma spp. is a biological control option to combine with B.t or Confirm. Trichogramma is released during the fruitworm oviposition period, one or two times, depending of the fruitworm infestation level, followed by a B.t application four to five days later. The recommended rate for vines and fruit crops is between 30,000 to 50,000 wasps per acre (http://www.bugsforbugs.com.au/index.php). Use the 50,000 rate when your fruitworm infestation is higher.

If your problem also includes the blueberry aphid, Aphidius matricariae is a good alternative to boost your natural biological control. The supplier’s recommendation for controlling aphids in general (including the blueberry aphid) is to release 500 to 3,000 wasps per acre, two to three times, one week apart, depending on the extent of infestation (http://www.biconet.com/biocontrol/matricariae.html).

The cost of the release of both Trichogramma and Aphidius wasps varies from $5.30 to $8.00 per acre for Trichogramma and from $34.00 to $200.00 per acre for Aphidius. In Table 1 you will find a list of prices for several biological control agents as of spring 2010. Commercial suppliers of biological control agents include Koppert Biological in Michigan, Rincon Vitova, CA (www. rinconvitova.com) and Biocontrol Network (http://www.biconet.com/index.html) among others.