It’s time to think about switching to shorter season hybrids

Above average precipitation is causing corn growers to consider switching from full-season to shorter-season corn hybrid seed, but when is the right date to do it?

Michigan, and much of the upper Midwest, is behind schedule in corn planting due to the above average precipitation experienced this spring. Unfortunately, the near-term weather forecast is calling for more wet weather. This delay in planting has many growers considering switching out their full-season corn hybrid seed for shorter-season hybrids on their remaining acreage. So, at what date should the switch be made? Of course, the answer varies from year to year based on weather and field conditions. However, some generalizations can be made based on yield data comparing grain yields of short- and full-season hybrids as affected by date of planting.

Figure 1 shows a response curve, based on net returns, generated from a two-year corn date of planting study conducted at Michigan State University. In this study, the full-season hybrid had a relative maturity rating of 106 days and the short-season hybrid’s relative maturity rating was 96 days. Although the curve will shift from year to year depending on weather variability, the shape of the curve is very typical for Michigan conditions and it illustrates three important points regarding corn date of planting: 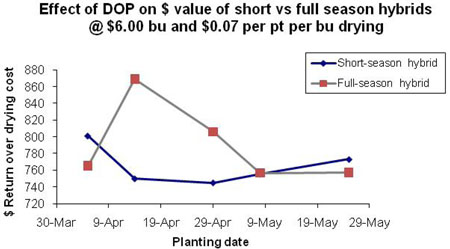 Figure 1. Effect of planting date on the $ return over drying costs of a full-season and short-season hybrid. Net $ return reflects value of yield ($6 per bu) and cost of drying ($0.07 per pt. per bu.).

Regarding point one, most varieties of corn will not germinate if soil temperature is below 50 degrees. Emergence and growth of young corn seedlings is temperature dependent and slows down considerably with cool temperatures. Planting too early increases the vulnerability of corn by slowing down the germination process and lengthening the vulnerable pre-emergence period. Additionally, very early planted corn has a greater likelihood of being exposed to frost and cold temperature damage after emergence. Conversely, planting corn too late results in yield loss by limiting the amount of seasonal GDD’s available to produce yield and may result in higher grain drying costs in the fall.

Because of our Northern latitude, Michigan corn growers have a shorter growing season to work with than our more Southern neighbors. Therefore, we need to be especially cognizant of the relative maturity rating of corn. Research has shown that at some point in the later part of the planting season, it pays to shift from a late-maturing, full-season hybrid to an early-maturing, short-season hybrid. The basis for the cost effectiveness of switching to a short-season hybrid is primarily in the ability to harvest dryer grain. Again, the optimum time to pull the trigger on the switch to a short-season hybrid will depend upon the specific hybrids considered and will vary from year to year depending on weather conditions, but it is generally around the third week of May for much of Michigan.