Adult Japanese beetle activity is intense in some Michigan chestnut orchards this season.

Japanese beetle adults are considered a generalist pest and affect many crops found on or near grassy areas, particularly irrigated turfgrass. Japanese beetle grubs feed on grass roots in early spring and again in fall, and can cause significant damage to turfgrass. Larvae prefer moist soil conditions and do not survive prolonged periods of drought. Japanese beetles typically emerge in early July and feed on hundreds of different plant species, skeletonizing the tissue. If populations are high, they can remove all of the green leaf material from the plants.

Japanese beetles are a substantial beetle and measure 0.375-0.5 inch long. The thorax is green and wing covers are copper. There are five tufts of white hairs on both sides of the abdomen and a pair of tufts on the end of the abdomen that can help distinguish Japanese beetles from other look-alike species. The legs and head are black.

Visual observation of adults or feeding damage is an effective scouting technique. Scout by walking diagonally through orchards as well as along an edge at least weekly until detection, paying special attention to the tree tops. Because of their aggregating behavior, Japanese beetles tend to be found in larger groups and are typically relatively easy to spot. Pheromone and floral-baited traps are available and potentially can help indicate the arrival of adults and help estimate the potential pest pressure, but are not considered effective for trapping out Japanese beetles. The traps may attract beetle adults from the surrounding area and contribute to damage. 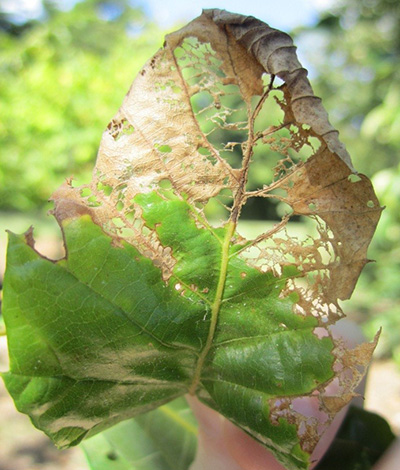 There are no established treatment thresholds or data on how much Japanese beetle damage a healthy chestnut tree can sustain, but well-established and vigorous orchards will likely not require protection. Younger orchards with limited leaf area will need to be managed more aggressively. Managing Japanese beetles can be a frustrating endeavor, as they often re-infest from surrounding areas, especially during peak adult emergence in July. This re-infestation is often misinterpreted as an insecticide failure, but efficacy trials have shown a number of insecticides remain effective treatment options.

For more information on insecticides available for treating Japanese beetles, refer to the “Michigan Chestnut Management Guide” by Michigan State University Extension. Use spot-treatments when possible for trees with large numbers of Japanese beetles to lessen the impact of insecticide application on beneficial insects.