Despite its’ name, Jerusalem artichokes have no connection to Jerusalem and are not an artichoke, but they are very versatile and good to eat.

This spring, I acquired a few pots of Jerusalem artichokes (Helianthus tuberosus). Honestly, I had heard of them and seen them growing along a few roadsides, but didn’t really know anything about them, so I decided to do a little research. They are in the genus Helianthus, the same genus as sunflowers. I planted them and they grew very nice foliage, their leaves looked like sunflower leaves and they had yellow flowers, which were quite prolific, blooming late in the season. I liked the flowers as they bloomed well after my other sunflowers.

Jerusalem artichokes are native to eastern North America and some historians think they may have originated in the Ohio and Mississippi River valleys. Native Americans grew them along with corn and beans. Despite its’ name, they have no connection to Jerusalem and are not an artichoke. They are often called sunchokes and cultivated for their nutritious and fleshy tuber.

A tuber is an underground swollen stem. Jerusalem artichokes’ tubers can be brown, white, red or purple. Their inner flesh is white. The tuber is a knobby root that resembles ginger. The tubers are smaller, sweeter and crisper than potatoes. They have a nutty flavor and good nutritional value. They can be eaten raw or cooked. They have a high level of inulin, which is a prebiotic fiber with medicinal properties. It can stimulate growth of bifidobacteria, which fights harmful bacteria and helps reduce certain carcinogenetic enzymes.

Jerusalem artichokes are very versatile. You can eat them raw or cooked. They can be mashed, roasted or sautéed. They can be dried and ground into flour. 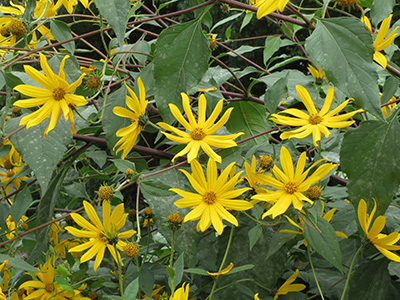 Here are a few more things I learned about this native crop:

With the three Jerusalem artichokes I planted, I enjoyed lush foliage that was a great screen and had awesome yellow flowers late in the season. I also harvested a large amount of tubers, and fed my cattle the foliage, which they enjoyed.

This is the recipe I used for my first venture into cooking with Jerusalem artichokes. They were quite tasty.

Serve alone as you would with roasted potatoes or with your favorite dipping sauce.

For more information on interesting roots you can eat, you might enjoy “Roots: The Definitive Compendium with more than 225 Recipes” by Diane Morgan. In this book, Morgan explores the fascinating world of culinary roots.

Learn how to plant your own garden to improve your health