Mid-June is best time to control juniper scale on needles.

Juniper scale, Carulaspis juniperi (Homoptera: Diaspididae), is a very common and sometimes serious pest of Juniper in the eastern United States. Juniper scales are light gray or white in color, very small (about 2 millimeters in diameter) and nearly circular. These insects become abundant on the needles, especially the undersides. The scales always attach themselves to needles rather than bark. Juniper scale is a pest of ornamental junipers, especially the pfitzers. 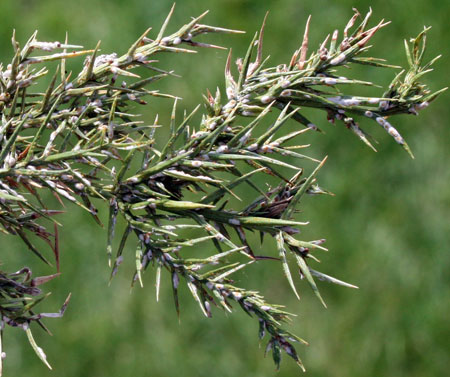 Badly infested plants show a yellowish-brown foliage color and the overall appearance of the plant is similar to a plant badly in need of fertilizer or water. Portions of the dead branches may be visible. Michigan State University Extension says taking a closer look at the branches may reveal the scale insects on the undersides of the needles. Plants decline over time and may be killed by severe infestations.

The scale insects overwinter as nearly full-grown individuals and mature in the spring. The female lays eggs in the spring under her scale covering. She dies soon after egglaying, but the scale cover remains attached to the needle, often for several years. The crawlers (immature scales) hatch from the eggs, usually in mid-June in Michigan, and leave the scale cover to search for a place to feed. The crawler stage may last for as short as 24 hours and after finding a feeding site the small, straw-colored crawler, attaches itself to a needle and begins to feed. 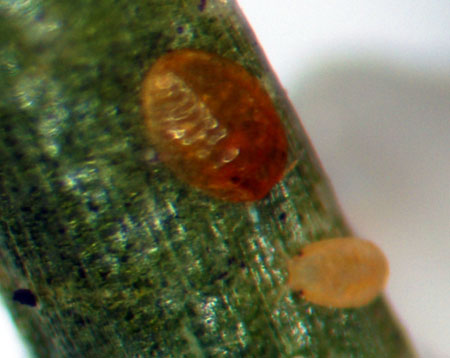 Soon it develops a coat of armor – the scale covering. The immature scales continue to feed and grow during the summer and during this growing period the skin is shed several times. The shed skins make up the hard protective cover for the scale insect. By late fall, the scales are nearly full grown and ready to overwinter. The cycle is repeated year after year. 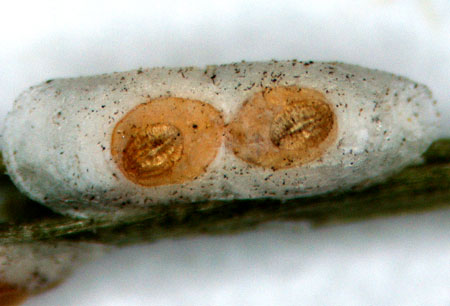 A close up of juniper scale. Like other armored scales, the cast
skins from previous molts remain attached to the adult scale.
Photo credit: Howard Russell, MSU Diagnostic Services

As with other armored scales, juniper scale is most effectively controlled by applying an insecticide when the crawlers are active. The least disruptive method of control is applying a 2 percent oil spray to the foliage when the crawlers are active. Complete coverage is important when using oils. Be sure to use a high quality summer oil, such as Sun Spray Ultra Fine Oil, to prevent injuring the needles. Also, oils should only be applied when the new needles are fully expanded. Applying summer oils during needle expansion can result in yellowing and premature needle drop.

A more aggressive approach is to apply bifenthrin, cyfluthrin or Orthene beginning in May through mid-June. Repeat at least two or three times at 10-day intervals to control the crawlers. These aggressive products will likely kill off the natural enemies of the scale and other pests of juniper.

Be sure to read and follow all the instructions and safety precautions found on the pesticide label before using any pesticides.